The genius of Square (NYSE:SQ) is the simplicity of its systems. On the back end, this fintech company is incredibly complex, but for users, it maintains an interface that is quick and easy. That’s what initially attracted me to the stock, along with seeing the growing number of merchants who used its Seller ecosystem and sang its praises. What’s kept me in the stock is seeing the company’s continued innovations, especially those involving its Cash App.

Square’s stock price is up more than 196% over the past year. That’s a dizzying climb, but one that’s backed by the company’s revenue and profit-margin improvements.

The biggest growth in revenue has been in the company’s Cash App, which management said generated $2.07 billion in Q3 or roughly 68% of the company’s revenue. In the quarter, Square had gross profit growth of 212% year over year.

Square keeps adding to what Cash App does, and that’s why it was one of the most downloaded financial apps in 2020. Users can store money, make payments to merchants or friends, manage credit cards, invest in stocks, and buy Bitcoin with the app. In November, after Square bought Credit Karma Tax for $50 million, it began offering its tax-prep software on the app for free.

With the growth Square is seeing, it’s not surprising that others will rise up to try to snatch market share. PayPal Holdings (NASDAQ:PYPL) is a huge competitor to Square. In October, it launched a service in its PayPal digital wallet that, like Square’s Cash App, allowed users to trade or purchase items in cryptocurrencies. While Square has the head start in the area, PayPal’s a much larger company with $5.46 billion in revenue in Q3, so it has the size and resources to try to cut into Square’s market share.

Some traders may also worry that Square’s stock has become overpriced, with a price-to-earnings (P/E) ratio of 390 and a forward price-to-earnings-to-growth (PEG) ratio of 5.30. That’s less concerning, however, because Square is a classic growth company with an early-to-market advantage. It is more concerned at this point with adding users than with making a profit. Through nine months, it said it spent $628 million on product development, up 26% year over year, and $781 million on sales, an increase of 78% over the same period in 2019.

The third thing to watch for is how the stock fares when the coronavirus pandemic winds down. Square’s business was helped last year because e-commerce ruled during the pandemic, driving more digital payments. More businesses also needed to use contactless payment to limit the spread of COVID-19.

However, I don’t see Square solely as a pandemic play, but as one whose fundamental business model was just adopted more quickly because of the pandemic. Once merchants and users are in the Square system, there isn’t that much churn because of the usefulness of its various platforms. 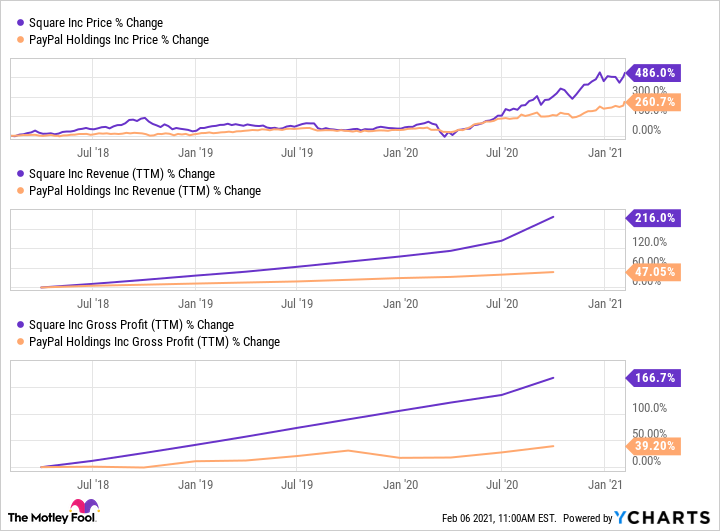 Plenty of growth ahead

Cash App is growing because it also has stock trading features that younger investors like, such as allowing the purchase of stocks in fractional shares and zero commission trades. It may also benefit from Robinhood’s recent stumble regarding the GameStop trading controversy.

Cash App was already growing quickly before the controversy. According to the Business of Apps, an app industry website, Cash App surpassed PayPal’s Venmo in new downloads in 2019 and was downloaded 90 million times last year.

While Cash App has been getting most of the attention, look for the company’s Seller ecosystem to expand in the next few years.

The ecosystem has gone from being a niche service for mobile businesses, such as farmer’s market vendors, to increasingly servicing larger sellers. There’s obviously plenty of opportunity in both ecosystems. The company said it feels it has reached only 2% of a $60 billion opportunity in its Cash App and just 3% of a $100 billion market with its Seller ecosystem.

When the pandemic ends, Square’s Seller ecosystem should start growing at a greater clip as people attend more outdoor events and go back to eating in restaurants, two areas where Square has a good foothold.

IBM Stock – Palantir Stock Over 4% Down So Far On Wednesday