Peloton (NASDAQ: PTON) has taken investors on a wild ride since its IPO in September of 2019. The stock was priced at $29, but initially slumped below its offering price as investors questioned the appeal of Peloton’s expensive exercise bikes and streaming spin class subscriptions.

Interest in Peloton remained tepid until about a year ago, when gyms and other businesses started closing down to deal with the pandemic. That sudden shift caused Peloton’s sales to surge, and the stock rallied throughout 2020 and hit an all-time high of $171 per share this January.

However, the stock then lost more than half its value and now trades in the low $80s. Let’s see why the bulls abandoned Peloton, and why it makes sense to sell this volatile stock before things get worse.

These numbers are all impressive, but Wall Street only expects Peloton’s revenue to rise about 36% next year as the pandemic passes and more gyms reopen. We should take those forecasts with a grain of salt, but investors should also brace for a post-pandemic slowdown.

At the end of the second quarter, Peloton told investors its full-year revenue would rise at least 123%. It lowered that forecast to 119% in the third quarter due to the recent recall of its new Tread and Tread+ treadmills, which could reduce its fourth-quarter revenue by $165 million.

Peloton had originally expected its treadmills to diversify its business away from its bikes and widen its moat against potential competitors, but a series of accidents involving children caused the U.S. Consumer Product Safety Commission to issue a public warning and urge Peloton to issue a recall. 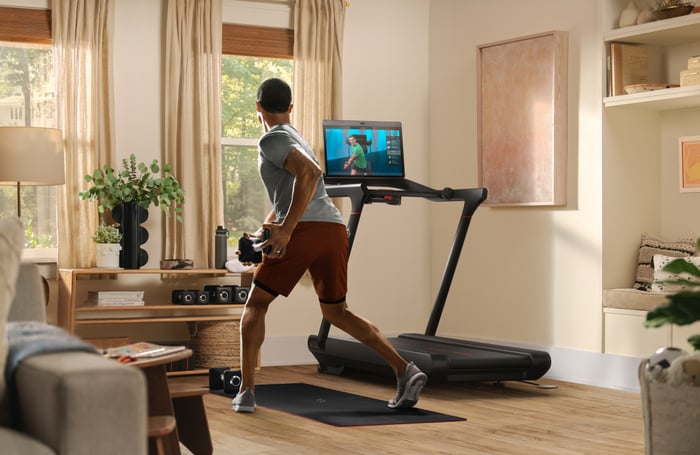 I previously compared Peloton to GoPro (NASDAQ: GPRO) and Fitbit, which both initially generated impressive growth before they saturated their respective markets. GoPro and Fitbit both struggled with recalls as they expanded their product lines, but neither company publicly defied regulators.

Peloton enjoyed an early mover’s advantage in its niche market of connected bikes and subscription-based workout classes, but many formidable rivals are now targeting the same market.

Competition wouldn’t be a major issue if the remote workout market was still rapidly expanding. However, the competition is heating up as the pandemic passes and more gyms reopen — which means Peloton needs to fend off these rivals in a shrinking arena.

Rising bond yields and a focus on reopening plays have caused many investors to rotate from growth to value stocks over the past few months.

That shift could be bad news for Peloton, which still trades at nearly 120 times forward earnings. The bulls will claim that Peloton deserves that premium, since analysts still expect its earnings to grow 129% next year.

Yet those forecasts likely haven’t factored in the full impact of its treadmill recall yet. Peloton could also struggle to beat those expectations if its competitors gain more momentum.

Peloton isn’t doomed yet, but there are plenty of better growth stocks to buy right now. Investors should consider taking profits in this shaky stock and stick to companies with brighter futures.

10 stocks we like better than Peloton Interactive
When investing geniuses David and Tom Gardner have a stock tip, it can pay to listen. After all, the newsletter they have run for over a decade, Fintech Zoom Stock Advisor, has tripled the market.*

David and Tom just revealed what they believe are the ten best stocks for investors to buy right now… and Peloton Interactive wasn’t one of them! That’s right — they think these 10 stocks are even better buys.