Outgoing Amazon chief Mr. Jeff Bezos has sold roughly $5 billion in shares since the start of this month, reveal his filings with the Securities and Exchange Commission (SEC). The executive is set to retire from his role as Amazon‘s Chief Executive Officer later this month, as he chooses to direct his focus on his 20-year-old aerospace company Blue Origin.

Amazon Chief Liquidates 1.5 Million Shares During First Week Of May

Mr. Bezos’s first share sale was made on Monday when he sold 1,700 Amazon shares for an aggregate price of $3,373 per share. This kicked off roughly 300 transactions which lasted until Thursday, with the final sale involving 426 shares at an aggregate price of $3,313 per share. The total value of shares disposed off by the Amazon chief equals $4.9 billion in one of his largest sale of the company’s stock since he announced his decision to step down as CEO earlier this year.

This particular sale comes as Blue Origin awaits the result of a complaint it filed with the National Aeronautics and Space Administration Office of the Inspector General. (NASA OIG) for not being awarded a $3 billion contract to develop a lunar lander for NASA’s Artemis program. Mr. Bezos is known to fund his aerospace venture by liquidating some of his holdings in Amazon, which has allowed him to become the world’s richest man and hold that title for years due to the boom in internet-based retail platforms.

The competition between Blue Origin and SpaceX will only heat up in the coming years as the Artemis program commences American missions to the lunar surface. While SpaceX is currently the only company in the world to operate reusable rockets capable of delivering a payload to the International Space Station (ISS) and deep space, Blue Origin is developing its own reusable heavy-lift rocket named ‘New Glenn’ after the legendary NASA astronaut and United States Navy aviator John Glenn. 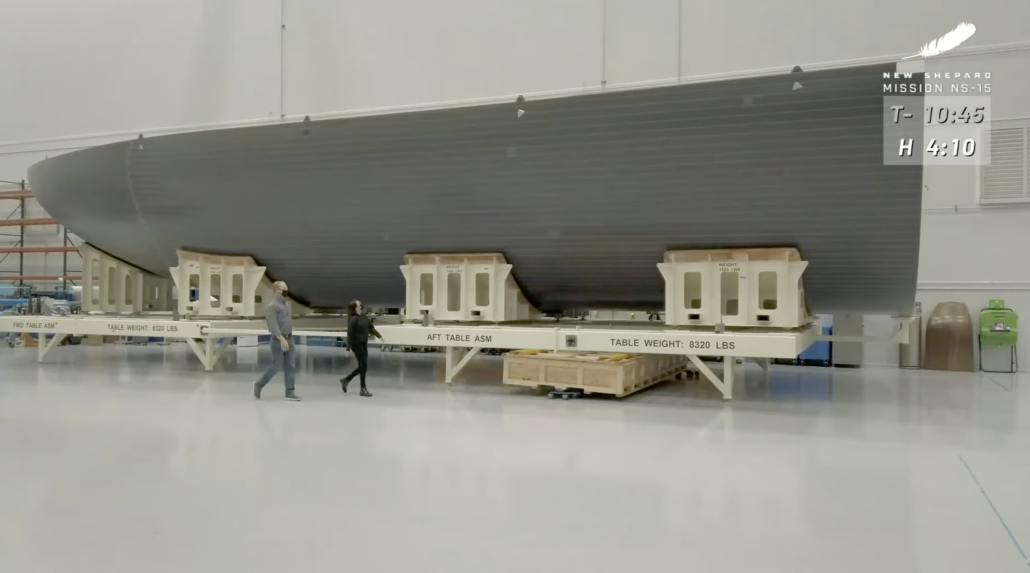 One halve of the New Glenn’s payload fairing in the Composites section of the company’s facility in Florida. This fairing will be capable of carrying 66 tons of cargo to Low Earth Orbit (LEO) once the New Glenn is operational. Image: Blue Origin

Through New Glenn, Blue Origin will allow Amazon‘s satellite-internet arm Kuiper to build its planned constellation of 3,326 satellites. Under the authorization that Kuiper has received from the FCC, it must launch half of these satellites by 2026. Amazon has also stated that it will consider all launch services providers when choosing the launch vehicle for its Kuiper satellites, and it announced last month that nine Atlas V rockets from the United Launch Alliance had been booked for the Kuiper satellites.

New Glenn can carry roughly twice the amount of payload as the Atlas V can, and therefore it should provide Amazon with an attractive alternaive once it’s operational.

Blue Origin’s bid to win the NASA contract for a lunar lander came under the spotlight as the agency’s associate administrator of the human exploration and missions operations directorate (HEOMD) Ms. Kathy Leuders explained that the company had requested advance milestone payments, which went against the contract solicitation rules. Since then, the company has appealed the decision, causing NASA to stop making payments to SpaceX, which will use a variant of its Starship upper stage for the NASA requirements.

While it’s unclear what the destination of Mr. Bezos’s latest stock liquidation will be, there is a high chance of it being spent to enable Blue Origin successfully develop the New Glenn. The rocket’s first flight is set for the fourth quarter of next year, which is in line with the company’s customer launch schedules.