Stuff On The Run

Welcome to another edition of Reader Feedback, Great Ones!

This is the day we take your deepest, dankest market and investing questions and put them on display … front and center. Remember, there are no stupid questions … only stupid answers, which I pride myself on providing.

And, if you wanna join in the fun, just drop us a line at GreatStuffToday@BanyanHill.com … I promise, we don’t bite. That costs extra.

Without any further ado, let’s get to our featured presentation:

“Stuck inside these four walls, sent inside forever. Never seeing no one nice again.”

Then I hear of the impending doom: “Centers for Disease Control (CDC) Director Rochelle Walensky warned of ‘impending doom’ if states reopen too quickly. ‘Right now, I’m scared,’ said a ‘visibly shaken’ Walensky, according to Politico.”

So, what stocks should I buy to prepare for the coming Zombie Apocalypse?

Thanks for writing in, Gary! The zombie apocalypse, you say? Hmm, all I need is a pint a day … if I ever get out of here. But that’s probably not enough for y’all investors out there.

First off, if we were headed for a real zombie apocalypse, I’m afraid there wouldn’t be much you could do. Stock up on food, guns and find a nice bunker to ride it out in would be my advice.

Also, have a copy of the Zombie Survival Guide on hand. Yes, that is an actual book. I have my copy on my desk right next to The Intelligent Investor and The Little Book of Common Sense Investing … just in case.

But say, say, say what you want … none of that will help us invest if the pandemic recovery goes sideways. In the event that the pandemic does have more punch left in the tank, it could lead the U.S. economy to a recession and Wall Street to a bear market.

Are we still talking about the zombie apocalypse or…?

I don’t believe a zombie bear market will happen, but if it does, Gary, you’ll want to prepare by ditching overhyped growth stocks. Instead, invest in value stocks with a consumer staples focus — companies like Walmart, Campbell, Microsoft, Costco, Procter & Gamble and Colgate-Palmolive.

Keep in mind that in this situation — i.e., a resurgent pandemic, U.S. recession and bear market — your main goal is wealth preservation, not gains. You want to survive with as much investment capital as possible so that, with a little luck, you have the cash to mop the blood off the floor when the carnage is through.

I hope that helps, Gary. Don’t let those silly love songs get you down; you’ll have no more lonely nights soon.

On a final note, I have to say that maybe I’m amazed at how wrong the zombie movies got real life. I mean, I’ve never seen a zombie movie where they announced that 20% to 30% of the zombies were dead, and people started going back out to dinner and a movie.

Besides, real Great Ones already know another way to deal with the zombie apocalypse — get off this dang rock altogether. While I can’t help you get to space yourself — not yet, anyway — space stocks are a bit closer at hand.

Instead, one little-known publicly held space company is poised to skyrocket as much as 3,900% when this soon-to-be-trillion-dollar industry goes mainstream.

Let’s see what else is hanging around in the Great Stuff mailbag…OK, Great Ones, are you all prepared and geared up for the zombie apocalypse now? Good.

I might be one of your biggest fans, as I get all of the twisted humor. My wife now asks if I’m reading you when I start chuckling for no apparent reason. I’d say we have a great relationship going here.

Getting back to this streaming business. My feeling is once 5G is all rolled out, or Wifi6 whatever you want to call that, someone with a lot of money is going to figure out how to get the best of all the streaming services.

I’d say, just like TV/cable has the choices we are used to, someone is going to figure out how to get a deal done where everyone will be able to get several streaming services for less money, and it will probably start once these streamers start rounding out or losing memberships.

They all have to keep revenue, right? Maybe your ROKU is thinking about it! Maybe you get a rotating thing where it’s three one quarter and three others the next, but someone will figure that out.

Consolidation is probably another thing that will happen too, with Amazon or Apple purchasing the ones who start to waver after a year or two of bad revenue and memberships. I do see that for sure.

People will always look to save money. I know because my wife has signed up for, I think, all of them but Disney. She has Hulu but not the plus, which is dumbfounding me, to be honest, because some of her favorite movies are from Disney. 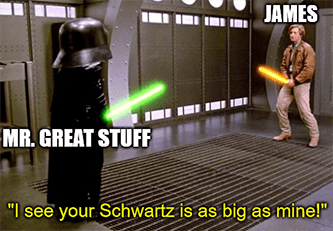 Good to see you again, James! I’m not sure what being my biggest fan says about your sanity, but I appreciate it, nonetheless. Thank you!

For instance, the proliferation of streaming services in the past two years has led to a resurgence in digital piracy.

(I’m looking at you, Great One Dick K. You know what you did. I’m not judging, just looking. Got a Plex server, dude?)

It seems that consumers were happy when it was just Netflix (Nasdaq: NFLX“>NFLXNFLX“>), Amazon Prime TV and Hulu. But now, there are just too many streaming services … and all of them cost between $5 and $20 per month. We’re essentially right back where we started with cable TV.

Every streaming company has content. Every single one wants a piece of the streaming revenue pie. And none of them want to share.

That’ll have to change, but I highly doubt we’ll see Amazon (Nasdaq: AMZN) or Apple (Nasdaq: AAPL“>AAPLAAPL“>) start buying up failing services anytime soon. I mean, sure, the Peacock streaming platform itself might be cheap, but the content behind it is extremely expensive. Ain’t nobody got time for that.

I think you hit the nail on the head with Roku (Nasdaq: ROKU), though. Companies like Roku are snapping up content, true. However, I believe that licensing deals are the real path forward (just like cable TV, unfortunately). As streaming services start to fail — and many of them will, mark my words — look for platform-agnostic companies like Roku to step in with content-licensing deals.

This is why Great Stuff Picks still holds ROKU even though the stock is up 317% since I recommended it back in May 2019. It’s also why we’re holding Walt Disney (NYSE: DIS“>DISDIS“>).

Roku is the king of streaming distribution, and Disney is now the king of online streaming. These are your big streaming winners. Everyone else is playing catch-up.

GM has been the most successful at receiving federal money, even if it was for a bailout.

Now that is just the jaded response I’d expect from a Great One, Thomas. Kudos.  We’re gonna end up on the hook for electric vehicles (EVs) somehow, might as well be upfront about it. At least we’ll get some sick electric Hummers with too many touch screens out of the deal … right?

I think that Toyota (when it wakes up to it) will run circles around Tesla, and Ford and GM as well as VW. — Bob H. 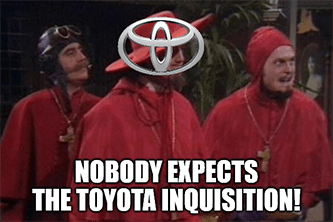 There’s a reason why Toyotas are the default recommendation when a non-car-geek asks what new ride they should get.

If Toyota can make a basic no-frills EV that just works and can be maintained for a reasonable cost, it’s bye-bye to Tesla’s totalitarian grasp on the U.S. market.

Thing is, you already mentioned Toyota’s sleepiness with jumping on new trends. It’ll be a while before we see electrified ‘Yotas roll off the line. Toyota is very conservative, despite its progressive public stance. What’d you expect from an 83-year-old Japanese company?

I see Toyota waiting until it knows there’s a stable EV market, then it’ll sink its teeth into dominating said market … but only after Volkswagen or GM does so first. Anyway, y’all up for another EV dissertation?

I think GM, VW and Ford all have a chance to overtake Tesla due to the variety they offer and their existing presence in various markets. Additionally, the collaborations and alliances they all have will help achieve and maintain economies of scale in tough markets.

Unlike Tesla, having legs in the large-, mid- and small-sized truck market offers coverage that allows for maximizing their profits, assuming the buying public accepts the inherent limitations of EVs.

Tying their fate to lithium-ion batteries while new powering prospects abound may prove problematic while ideas like “Powerpaste” from Germany promise to mix hydrogen and water on an “as needed” basis with few temperature restrictions while leaving virtually no byproduct and removing the biggest concern with hydrogen: combustibility.

Disposing of 1,300 pound expended batteries is another issue no one is discussing… — Chuck M.

Agreed, agreed and agreed! Are you me, Chuck?

Shocker, but I don’t trust Musk and co. to come up with trucks for people who, you know, actually need trucks. Show me a Cybertruck hauling feed, and I’ll show you a wayward pavement princess.

GM and Ford, despite their flaws and routine bone-headedness, are in tune with what consumers actually want. (We don’t talk about the Aztec around here, sorry GM.)

And Ford’s already capitalizing on all those folks who want something not-Tesla from the EV world. That’s why Tesla’s market share slipped 12% just from Ford’s Mustang Mach-E hitting the market last year.

When GM’s EV-development Death Star is fully operational, it too will lay a beating on Tesla, followed shortly by whatever metric EV monstrosities Voltswagen comes up with. (If it ain’t called the VW Lightning Bug, I don’t want it.)

Anyway, until cars can power off that goopy droopy Powerpaste — by the way, ew — battery-bound, we must be. Invest in better batteries, we can. Yoda … you will become.

Turns out, beating Tesla at its own game has been done before. Who knew? Go on and read that there … then make sure your voice is heard for next week’s Reader Feedback, capisce?

Whatever’s on your mind, send it along to GreatStuffToday@BanyanHill.com! Oh, and thanks to Robert S., Thomas H., George S. and BDDSKI for your thoughts on Tesla’s tangled tussle with its rivals. I appreciate y’all writing in.

And for all those numerous readers writing in saying “Add me!” or “Sign me up!” … first off, how’d you receive this? Second, all you have to do to sign up for Great Stuff is click here!

And don’t forget! If you want to be in next week’s edition of Reader Feedback, drop us a line at GreatStuffToday@BanyanHill.com! But, if that’s still too many virtual hoops to jump through, why not follow along on social media? We’re on Facebook, Instagram and GS-Newsletter&utm_medium=Email&utm_campaign=Daily-Article-Traffic” target=”_blank” rel=”noopener”>Twitter.

Until next time, stay Great!