‘MUTED DAY’:
The main US indices have been range-bound, as there have been no catalysts to move investor sentiment, with the focus centering on US inflation data

US stocks closed modestly higher at the end of a torpid week marked with few market-moving catalysts and persistent concerns over whether inflation spikes could linger and cause the US Federal Reserve to tighten its dovish policy sooner than expected.

The NASDAQ Composite gained the most among the three major indices, while the bellwether S&P 500 squeaked its way to a second straight record closing high.

The indices have been range-bound, with few catalysts to move investor sentiment. Much of the focus centered on Thursday’s consumer price data, which eased jitters over the duration of the inflation wave. 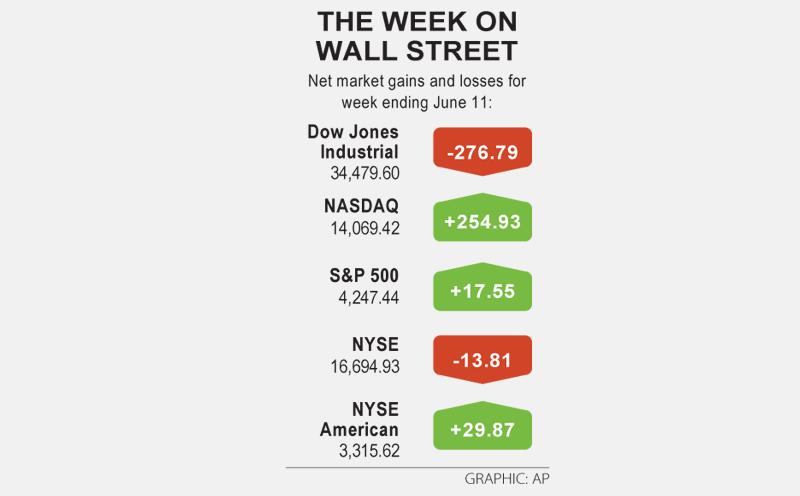 “It’s a muted day today,” said Oliver Pursche, senior vice president at Wealthspire Advisors LP, in New York. “The summer is settling in, people are slipping out of work early and there’s nothing in the news that’s going to materially drive the market in either direction.”

“So, investors are going to wait until earnings season,” he said.

The US Federal Reserve has repeatedly said that near-term price surges would not metastasize into lasting inflation, an assertion reflected in the University of Michigan’s Consumer Sentiment report released on Friday, which showed inflation expectations easing from last month’s spike.

Investors now turn their attention to the Fed’s statement at the conclusion of next week’s two-day monetary policy meeting, which would be parsed for clues regarding the central bank’s timetable for raising key interest rates.

“Our view continues to be that inflationary data is transient and we will be around the 2 percent mark for the year,” Pursche added.

Benchmark US Treasury yields posted their biggest weekly drop in nearly a year, weighing on the interest-sensitive financial sector in recent sessions.

The US Food and Drug Administration is facing mounting criticism over its “accelerated approval” of Biogen Inc’s Alzheimer’s drug Aduhelm without strong evidence of its ability to combat the disease.

For the week, the S&P rose 0.4 percent and the NASDAQ advanced 1.8 percent, while the Dow lost 0.8 percent.

Among the 11 major sectors in the S&P 500, rebounding financial stocks and tech led the gainers on Friday, while healthcare suffered the biggest percentage drop.

Much of the trading volume this week was attributable to the ongoing social media-driven “meme stock” phenomenon, in which retail investors swarm around heavily shorted stocks.

Advancing issues outnumbered declining ones on the New York Stock Exchange by a 1.83-to-1 ratio; on NASDAQ, a 1.70-to-1 ratio favored advancers.

Volume on US exchanges was 9.11 billion shares, compared with the 10.56 billion average over the past 20 trading days.