Owning just a couple of stocks that post explosive gains can be a life-changing experience for your finances. Take Amazon and Netflix, for example. If you invested in either of these companies early in their publicly traded histories and held on to your shares, you would have enjoyed incredible gains. However, investors didn’t even have to get in super early to enjoy life-changing returns with these companies.

E-commerce and streaming video were already fairly well established a decade ago, but many investors correctly saw that these industries still had huge room for growth. If you made a $10,000 investment in Netflix stock 10 years ago, your holdings would now be worth roughly $132,000. That same $10,000 investment in Amazon stock would be worth about $173,000 at today’s prices.

Growth-dependent tech stocks are prone to volatile pricing swings, but taking a buy-and-hold approach to quality companies in the space can transform your portfolio’s performance. Read on for a look at two companies that could deliver huge returns for risk-tolerant investors.

Appian (NASDAQ:APPN) provides a software development platform that allows users to quickly build and deploy applications. The company’s app-building service allows users to “drag and drop” different features and processes into projects, creating a streamlined and accessible approach to software development. This setup can help companies complete projects faster and it allows even relatively inexperienced developers to create applications that improve workflow efficiency.

Software will only become increasingly essential to business success, and Appian should have plenty of opportunities to attract new clients and boost spending on its platform. However, you probably wouldn’t get that impression if you looked at its stock performance in recent months. 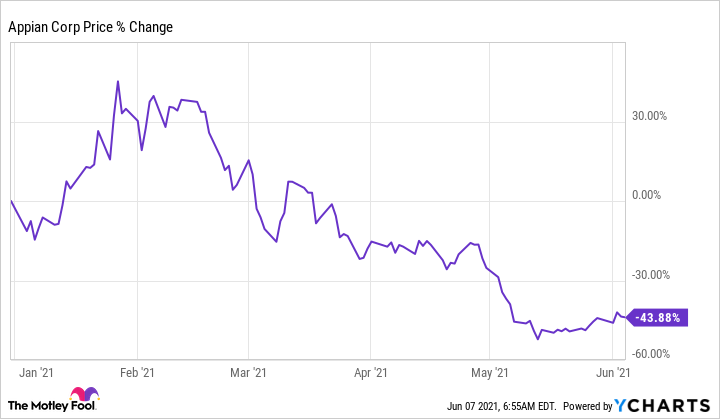 After an impressive run, the stock price has plummeted roughly 65% from the record high it hit earlier this year. What’s at the root of the crushing sell-off? For one, tech stocks have felt the squeeze as investors have rotated into economic reopening plays and value-oriented names. Slowing growth at Appian has also weighed on the company’s valuation.

Revenue climbed just 13% year over year in the quarter to reach $88.9 million, although that doesn’t tell the whole story because the company is still in the process of pivoting to a more subscription-heavy business model. Overall subscription revenue rose 26% compared to the prior-year period to reach $63.8 million, which is still significantly below the 31% annual growth rate the segment posted last year, but the deceleration isn’t hugely concerning at this point.

Appian has a market capitalization of roughly $6.4 billion and is valued at approximately 18 times this year’s expected sales. That’s still a highly growth-dependent valuation, but demand for accessible software development and process automation services could increase dramatically over the next decade and beyond, and the business has a long runway for expansion. For patient investors, Appian stock could go on to be a big winner.

Baozun (NASDAQ:BZUN) is a China-based e-commerce services specialist that’s sometimes compared to Shopify because both companies provide website-creation tools that help businesses launch and run online retail stores. With Shopify’s stock up roughly 3,920% over the last five years, it’s an eye-catching comparison, but there are some key distinctions investors should be aware of.

Baozun provides website creation tools, customer management, advertising and marketing, and warehousing and order-fulfillment services, and its core customer base consists of large Western companies that are aiming to benefit from the massive and fast-growing Chinese e-commerce market. Its platform also allows companies to integrate their stores into many of China’s biggest e-commerce hubs, including Alibaba‘s Tmall, JD.com, Tencent‘s WeChat, and ByteDance’s Douyin (the Chinese version of TikTok).

Baozun has a leading position in its corner of the e-commerce market, but it’s fair to say that the business has given investors reason to be cautious over the last few years. Despite shifting some focus away from warehousing and order fulfillment services in favor of prioritizing its web platform, margins have grown at slower than expected rates — and actually contracted in some quarters.

Sales and earnings growth have been uneven despite signs of progress on some important fronts, and the company has also raised funding for growth initiatives through substantial new share offerings that have diluted the stock. Factor in geopolitical concerns stemming from tensions between the U.S. and China, and it’s not hard to see why Baozun’s stock performance has lagged far behind Shopify’s.

Despite surging roughly 417% over the last five years, Baozun’s stock price is actually down about 45% over the last three-year period. However, it looks like margins are starting to climb again, and the business still has big growth potential as it caters to Western brands and moves to expand adoption of its services among large and small domestic businesses.

With the company valued at roughly $2.7 billion and its stock trading at approximately 26.5 times this year’s expected earnings, Baozun offers investors an attractive risk-reward dynamic and could wind up crushing expectations.