Home » Shopify Stock – The Most Popular Guru Buys of

The first quarter ended March 31 marked the fourth consecutive quarter of the latest bull run for U.S. stock markets, with the major indexes once again reaching new unprecedented highs. The S&P 500 surpassed 3,900 for the first time in history during this period, the Nasdaq rocketed above 14,000 and the Dow Jones Industrial Average beat the 33,000 mark.

The U.S. stock market continues to be valued far higher than what the country’s collective businesses are currently worth. The Buffett Indicator, which is the ratio of total market cap to gross domestic product, stands at 199.4% as of June 2, indicating that the U.S. stock market is significantly overvalued. This metric is named after
Warren Buffett (Trades, Portfolio) , who famously called it “probably the best single measure of where valuations stand at any given moment.”

Due to the unprecedented intervention of the Federal Reserve to keep stock prices high, GuruFocus now includes in this chart the total assets that the Fed has poured towards propping up stock prices. With Fed support factored in, the valuation ratio of the Buffett Indicator stands at 146.8%, which is still overvalued but not by quite as much. It should be noted that Fed support disproportionately benefits the nation’s largest companies.

Despite the general overvaluation, gurus have still found plenty of names that they expect to profit on. According to GuruFocus’ Hot Picks, a feature which allows investors to screen for the stocks that had the highest number of guru buys or sells based on the most recent regulatory filings, the five most popular stocks among gurus during the first quarter of 2021 (as determined by net buys) were International Flavors & Fragrances Inc. (IFF, Financial), Shopify Inc. (SHOP, Financial), The Estee Lauder Companies Inc. (EL, Financial), Antero Resources Corp. (AR, Financial) and Snowflake Inc. (SNOW, Financial).

International Flavors & Fragrances (IFF, Financial) is a New York-based company that produces a variety of flavors, fragrances, cosmetic actives and other chemicals for sale around the world. It has facilities in more than 44 countries.

During the quarter, 14 gurus bought shares of International Flavors & Fragrances while one guru sold shares of the company, resulting in 13 net buys. As of the quarter’s end, 16 gurus have a stake in the company. 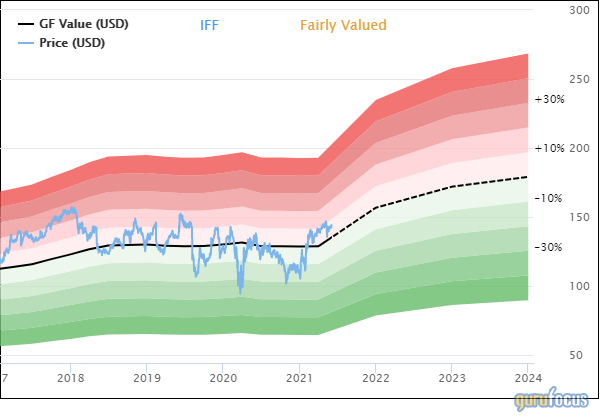 International Flavors & Fragrances is currently in the midst of its business optimization strategy, which aims to divest non-core business and acquire core-related businesses in order to focus on its main areas of expertise. For example, in its first-quarter 2021 earnings report, the company announced that it has entered into an agreement to divest its fruit preparation business.

Combining the company’s business optimization strategy with an expected recovery in demand for commercial spices and other chemicals sold by International Flavors & Fragrances, Morningstar analysts are expecting revenue for the company to come in at $11.2 billion in 2021 and $12.3 billion in 2022, while earnings per share are predicted to be $3.50 in 2021 and $5.48 in 2022.

Shopify (SHOP, Financial) is a Canadian company that owns a proprietary e-commerce platform of the same name. Its platform enables businesses to easily create online stores or add online stores and retail point-of-sale systems to their existing operations.

During the quarter, 16 gurus bought shares of Shopify while five gurus sold shares of the company, resulting in 11 net buys. As of the quarter’s end, 19 gurus have a stake in the company. 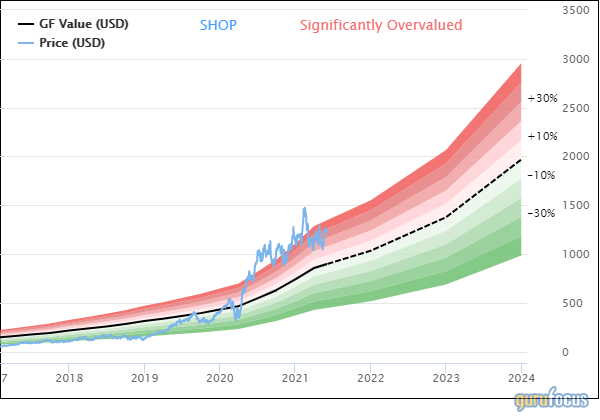 Shopify has been a beneficiary of the accelerated pace of the digitalization of commerce brought about by the Covid-19 pandemic. Its products help businesses quickly and easily start or grow the reach of their offerings. One of the main reasons for entrepreneurs to choose Shopify over other platforms like Amazon (AMZN) is that it allows them to retain more independence.

Due to its niche focus and platform provider model, Shopify’s growth will most likely mirror the growth of e-commerce very closely, and this expectation is clearly reflected in analysts’ estimates. Morningstar analysts expect the company’s revenue to grow to $4.3 billion in 2021 and $5.8 billion in 2022, while earnings per share are expected to be $3.97 in 2021 and $4.23 in 2022.

New York City-based Estee Lauder Companies (EL, Financial) is an American manufacturer and seller of a range of skincare, makeup, fragrance and hair care products. Its portfolio includes both affordable and prestige brands.

During the quarter, 13 gurus bought shares of Estee Lauder while three gurus sold shares of the company, resulting in 10 net buys. As of the quarter’s end, 17 gurus have a stake in the company. 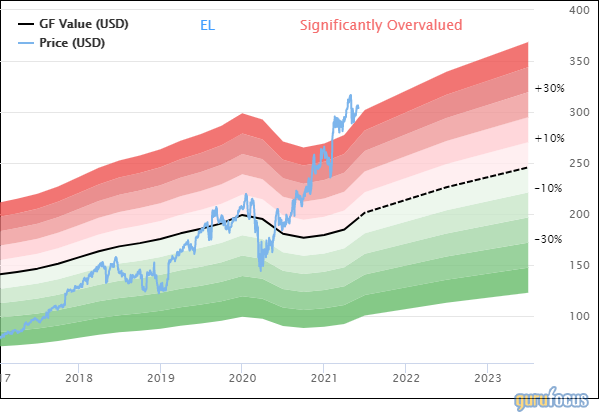 Estee Lauder expects to see strong sales recovery in the coming year as new Covid-19 cases begin to decrease and more customers feel comfortable returning to in-store shopping experiences. Additionally, the company is continuing to invest in promising growth opportunities, such as increasing its ownership in DECIEM, building state-of-the-art research and manufacturing facilities in the Asia-Pacific region expanding the online business.

Antero Resources (AR, Financial) is an independent natural gas and oil company engaged in the acquisition, exploration, development and production of hydrocarbons using hydraulic fracturing. It is a pure play with reserves located entirely in the Appalachian Basin.

During the quarter, 11 gurus bought shares of Antero Resources while one guru sold shares of the company, resulting in 10 net buys. As of the quarter’s end, 12 gurus have a stake in the company. 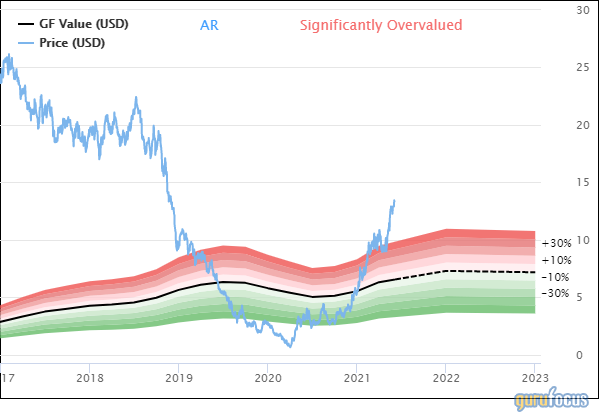 Antero claims that its differentiated business model, which focuses on liquids rich development transportation efficiency, provides flow assurance and enables better price realizations. These efforts are helped along by the company’s exclusive focus in the Appalachian Basin. Despite having a high amount of debt even for the oil and gas industry, Antero seems to be managing it just fine, as the Piotroski F-Score of 6 out of 9 indicates financial stability.

The oil and gas industry is also expected to see price recovery in the years ahead as travel picks up around the world and the international fight for market share remains on the backburner for most major oil-producing nations. Morningstar analysts are expecting Antero to bring in revenue of $4.4 billion in 2021 and $4.3 billion in 2022, while earnings per share is predicted to come in at 74 cents in 2021 and $1.69 in 2022.

Snowflake’s (SNOW, Financial) core product is a cloud-based data warehouse that seamlessly operates across the three major public clouds. Founded in 2012, it began to build a cloud computing data warehouse right near the beginning of the cloud’s rise in popularity.

During the quarter, 11 gurus bought shares of Shopify while two gurus sold shares of the company, resulting in nine net buys. As of the quarter’s end, 16 gurus have a stake in the company. 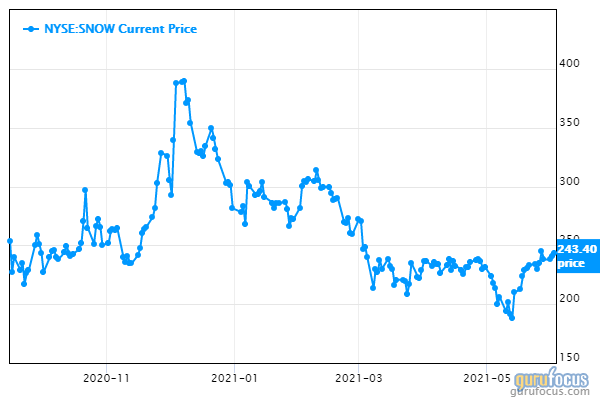 Taking advantage of the trends of big data processing and the public cloud, Snowflake can take all of the data from a company (regardless of the source) and make sense out of it, essentially providing unique value-added services that competitors have yet to replicate. This could become a potential source of moat for the company, if it can continue its rapid growth and become the undisputed leader in its niche before direct competitors can get a foothold.

Analysts seem keen on the company’s prospects, having issued positive forecasts for the top line and decreasing losses for the bottom line. For full fiscal 2022, Morningstar analysts estimate that revenue will be $1.1 billion, rising even higher to $1.8 billion in fiscal 2023. The loss per share is expected to decrease to $2.45 in fiscal 2022 and $2.38 in fiscal 2023.