I must admit that I’ve likely frustrated readers regarding my take on Pershing Square Tontine Holdings (NYSE:PSTH). With the popularity of special purpose acquisition companies, folks want to know whether they should buy, sell or look for another opportunity. Frankly, PSTH stock is difficult to figure out because it has a mixture of positives and negatives.

Of course, the biggest factor working in favor of the blank-check firm is the sponsor, legendary investor and hedge fund manager Bill Ackman. When it comes to SPACs, you live or die by its sponsor. Typically, a SPAC has about two years to identify a reverse merger target and seal the deal. If nothing happens, shareholders get their money back.

Naturally, this presents a conflict of interest. First, SPAC sponsors usually receive a handsome reward for securing a deal. Second, sponsors are almost always rewarded for putting ink on the contract, not necessarily for finding the right deal. Even if they find the right deal, they can always bail: see Chamath Palihapitiya and Virgin Galactic (NYSE:SPCE) as an example.

Where PSTH stock might be different from the litany of SPAC offerings, though, is that Ackman has a long track record for successful deals. Sure, he’s had the rare blunders, as our own Chris Tyler pointed out. But overall, Ackman has a reputation to protect and his management team has formidable “expertise in buying successful investments.”

People like that so I’m not surprised that PSTH stock garnered early demand. At the same time, Tyler warned that the clock is ticking. Ackman “has a July deadline to announce a pending merger or risk PSTH a redemption of Pershing Square Tontine at $20 a share.”

Based on my interpretation, it seems Tyler is cautiously optimistic because a few big-dollar deals are possible. Still, investors should be cautious because the market is not sending the right signals.

Investors May Be Giving Up on PSTH Stock

Another one of my InvestorPlace colleagues, Vince Martin, hasn’t been too kind to PSTH stock. As he noted, the SPAC’s shares fell from $32 to $25. Even at this relative discount – at time of writing, PSTH is trading hands at under $25 – he still feels that it’s overvalued.

Previously, Martin went through the math regarding how shares of Pershing Square Tontine are aggressively priced. Due to the dilution effect, PSTH stock at its prior higher levels was simply not worth the going rate. Right now, there’s the added pressure of getting a deal done before the July deadline. Worse yet, the potential merger targets know it. Martin explains:

What targets remain will have leverage with PSTH. They can negotiate better terms with one of the hundreds of SPACs also looking for a deal. Or they can go the initial public offering route.

Expecting $2 billion in value creation — the minimum really needed to own PSTH, even after the pullback — seems awfully aggressive in that context.

The other big problem for PSTH stock is that the market is sending a clear message that it’s losing confidence in Ackman. Between late 2020 and late March of this year, PSTH shares printed what looks like a bearish head-and-shoulders pattern. 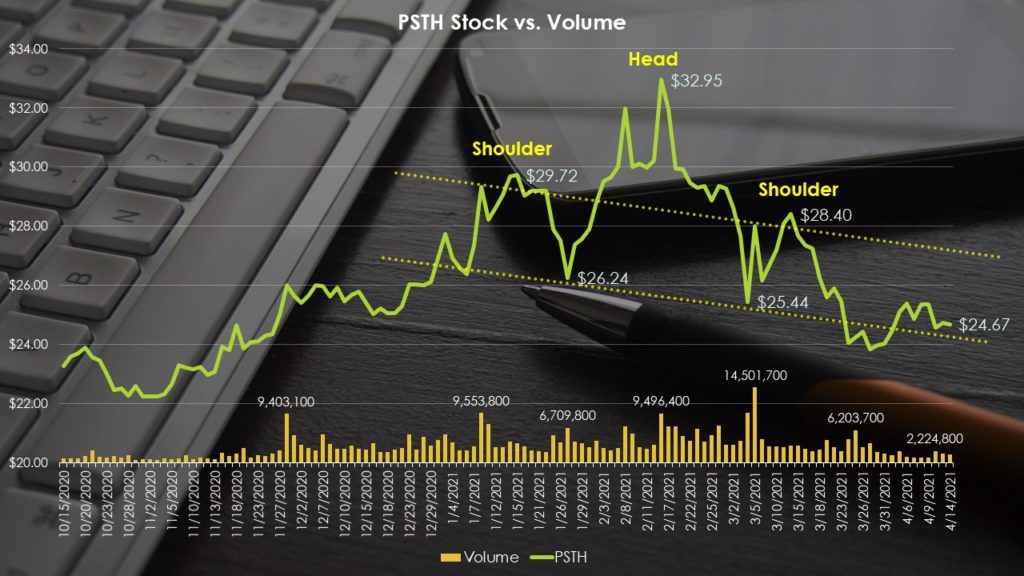 Further, by tracing a line across the pattern’s neckline – along with a parallel line across the two shoulders – you can see that PSTH stock is barely clinging to technical support. How long this support lasts is anyone’s guess. Yet with volume steadily decreasing, it seems folks are losing interest in the SPAC.

The counterargument is that this could also be a shaking out of the weak hands. These days, anything is possible. But with fewer options on the table for Ackman and a clock that continues to tick, it seems likelier that investors are looking for better opportunities.

Are People Getting Savvy to SPACs?

And that’s just it. With more time and a share price closer to the $20 redemption value, PSTH stock seemed like a very limited risk investment, to say the worst about it. Now, even if shares did fall back toward redemption, investors may not be willing to have another crack at it.

Perhaps people are wising up to SPACs. Here’s the deal – Wall Street rarely gives you a free lunch. A cheaper PSTH stock price at this stage may appear to investors as an unnecessary tie-up of their money.

Yeah, it’s only a few months. But with happening sectors like cryptocurrencies soaring to the moon, a few months could represent a once-in-a-lifetime opportunity of massive profits. In this case, Pershing Square Tontine’s potential of bagging a mature unicorn doesn’t seem so appealing. Therefore, you may just want to take your funds to a more exciting arena.

On the date of publication, Josh Enomoto did not have (either directly or indirectly) any positions in the securities mentioned in this article.

Netflix Stock – Netflix (NFLX) Stock Sinks As Market Gains: What You Should Know