The foundation of Technical Analysis is considered to be laid on some of the most important principles of “Dow Theory”. The Dow Theory has always been a very integral part of technical analysis. The Dow Theory was used extensively even before the western world discovered candlesticks.

The Dow Theory was introduced to the world by Charles H. Dow, who also founded the Dow-Jones financial news service (Wall Street Journal). During his time, he wrote a series of articles starting from the 1900s which in the later years was referred to as ‘The Dow Theory’.

Out of the many principles of Dow Theory, the one that is most important to us today is stated below:

“Indices must confirm each other”.

This generally states that, the two key indices which Mr Dow and his partners invented, The Dow Jones Industrial Average (DJIA), and the Dow Jones Transportation Average (DJTA), on the assumption that the business conditions were interdependent. Basically, whatever is produced has to be transported, hence both of the indices have to move together to confirm a trend.

However, in the very near-term charts, there is a mismatch which is occurring. The Dow Transportation has started to LAG the Dow Industrials. This mismatch of trend could cause a lot of market participants to rethink about the next course of action. 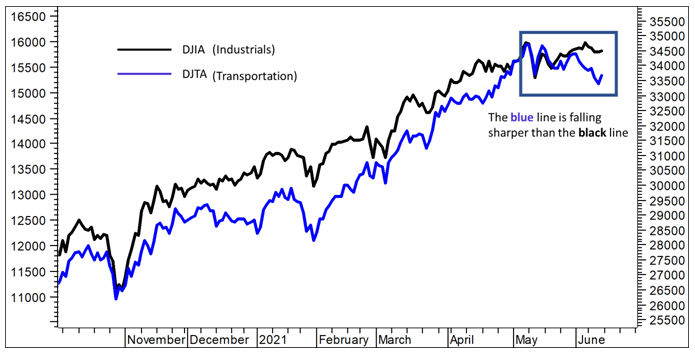 As compared to major parts of the historical analysis, in strong trends both the blue line and the black line tend to hug each other confirming a strong trend.

The question therefore is, will this just be a short-term phenomenon or there is a much larger trend which could emerge out of this. Or if the Transportation Average leads the trend, it could result into a probabilistic Industrial Average as well going through a phase of correction in the near term.

For the trend to confirm back again, we may need to see Transportation average getting back into a much stronger degree of uptrend as compared to its counterpart.

These series of observations could probably put the key indices and the near-term outlook into a spot of bother. It may be a critical factor to watch out for not just on equity front, but more from a GLO(BA)L perspective as well.

Trend or No trend we will get to know pretty soon!