We may have seen the start of a market last week, as the Federal Reserve, on Wednesday, began signaling—albeit gradually—that the easy money ride will be coming to an end.

Though investors have been spoiled by the most generous stimulus ever, both from the Fed and the Biden Administration, a healthy economic expansion must include the US central bank managing the pace of inflation. Otherwise, the recovery could become a short-lived affair, with the economy falling back into recession. Nevertheless, markets have been broadcasting their displeasure.

On Friday, US equities dropped for the fourth straight day, on the heels of Wednesday’s surprisingly hawkish Fed. As well, Friday’s quadruple witching weighed on stocks when single-stock options, single-stock futures, stock-index options and stock-index futures all expired in tandem.

The lost 1.3% of value on the final day of trade this past week, making it the worst week for the broad benchmark since February. The index fell below its uptrend line since the infamous March 2020 bottom.

The lost over 500 points on Friday, falling 1.6%, to lock in its worst weekly performance since October 2020. The 30-component index, which represents blue-chip value shares, was particularly hard hit by the Fed’s talk of tightening.

Still, of the four major US indices, it was the that underperformed ahead of the weekend, dropping more than 2% for the day. The small-cap benchmark, which lists domestic firms which suffered the most during lockdowns, has been the poster child for the Reflation Trade, with the economy restarting. 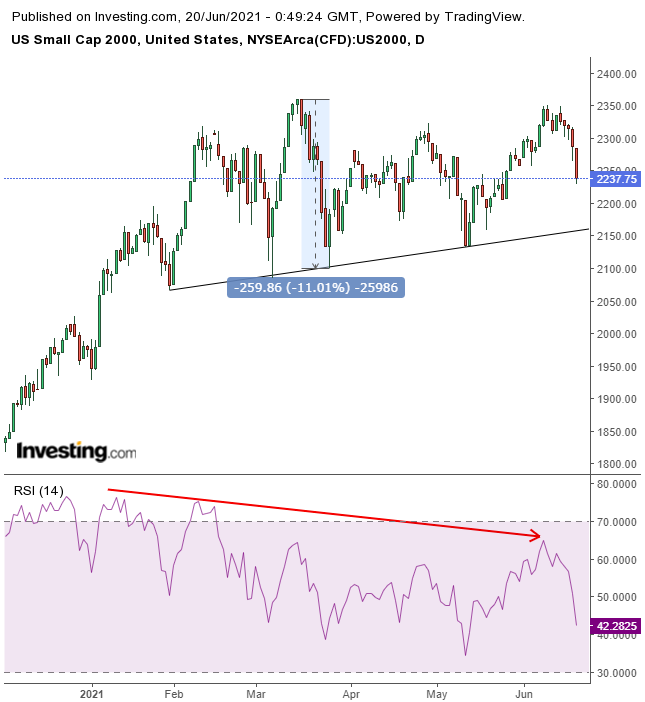 The Russell 2000 has already been flirting with a correction. The index has declined 11% from its Mar. 15 record to its Mar. 25 low. As we at the end of May, the benchmark could be topping out, as momentum weakens, with the RSI providing a negative divergence in the short-to-medium term. Stay tuned as the long-term outlook continues to develop.

Though the tech-heavy tumbled 0.9% on Friday, it still outperformed its US index peers. On Friday the sector was also the second-best performer on the S&P, after shares, (-0.5%).

Tech also outperformed on a weekly basis, as it was the only sector in the green, up 0.1%. On a monthly basis, tech shares provided the best returns as well, +6.1%. Even over the past six months the tech sector remained in the green, up 9.3%, second only to Real Estate which gained 13.2% over the same time frame. 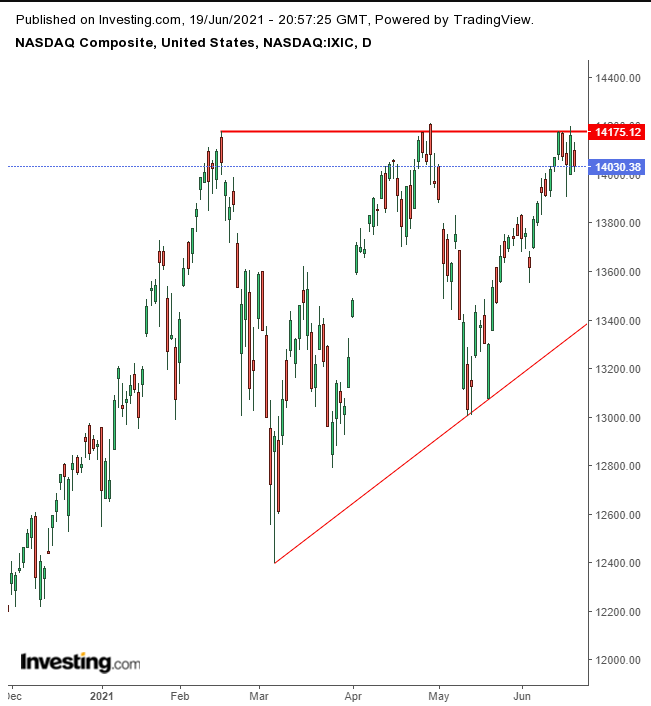 The NASDAQ Composite also boasts the strongest chart. The index is testing the top of a large ascending triangle, a pattern that develops when buyers are more eager than sellers. If this continues, buyers will have absorbed all available supply and will have to increase bids past 14,175 to obtain more. On Friday, however, the index retreated along with the rest of the market.

Though Bloomberg said, “the Federal Reserve’s surprise hawkishness upended the reflation trade that has dominated markets this year,” we’ve clearly just demonstrated that the tech sector has been outperforming value stocks on every measure this year.

Fed President James Bullard the US central bank finally began to debate reducing the rate of its post-pandemic QE program, which includes bond buying, and Treasuries, including the benchmark , fell within a whisker of 3-month lows. 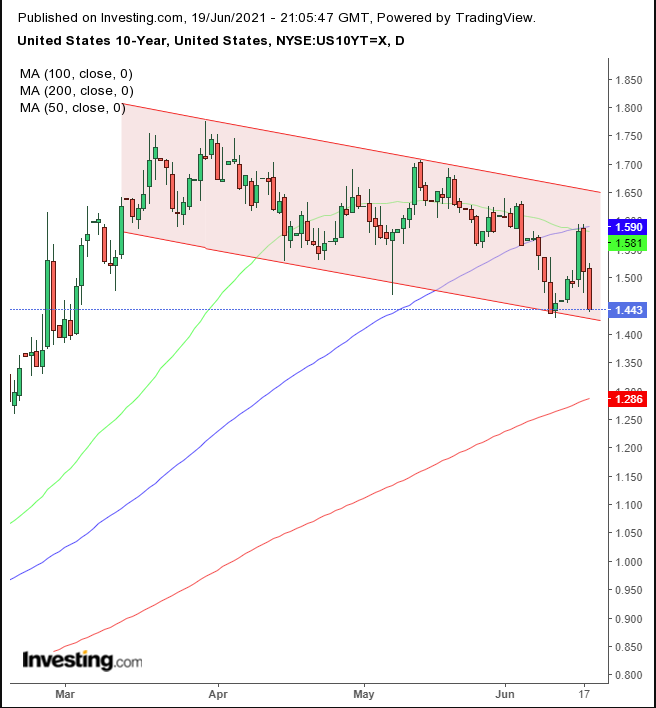 Treasury yields are testing the bottom of a temperate falling channel, as the 50 DMA crossed below the 100 DMA, threatening a sharper downturn.

The mere mention by the Fed of rate hikes and reduced bond buying was enough to boost the . 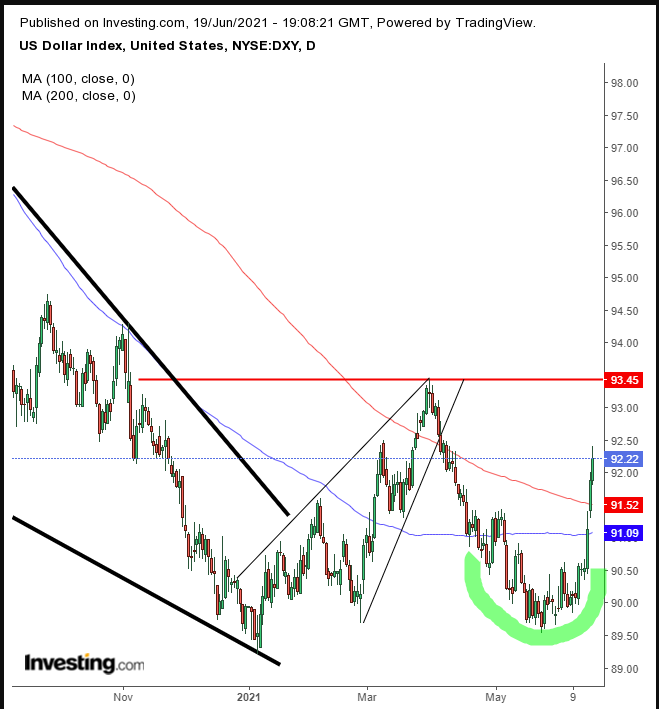 The greenback its rounding bottom, after finally rebounding from its slump, the follow-through of a rising wedge. If the USD scales above 93.50, it will have completed a double bottom, supporting our bullish position, in place since the upside breakout of the massive falling wedge from the March 2020 peak.

However, if the dollar should fall below the Jan. 6 low, we will reverse our position to strongly bearish.

was pressured by the stronger USD. 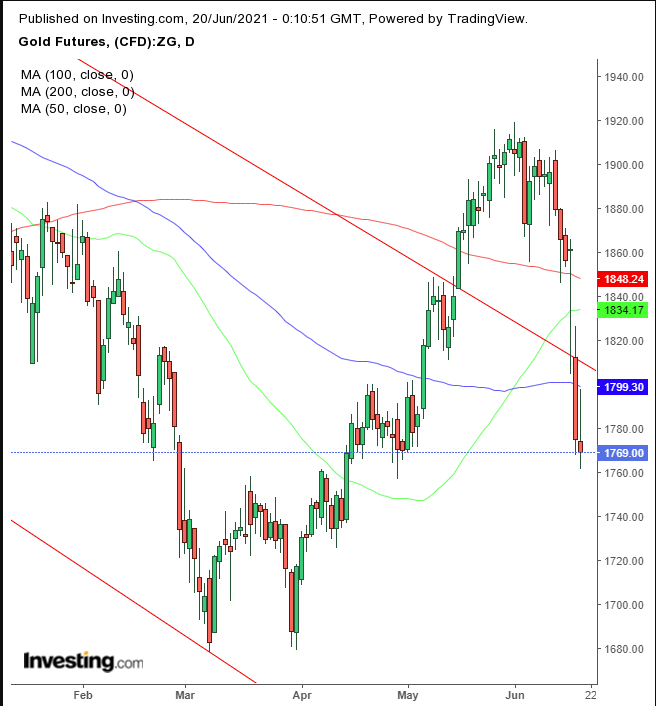 The precious metal completed a top with the 200 DMA as its natural neckline. It then proceeded to fall back into its falling channel, on its way to test the $1,678.40 low registered on Mar. 8.

Hit by a barrage of negative developments, has edged lower for a sixth straight day. For starters, higher interest rates and bond tapering increase the value of the dollar, invalidating, at least in part, Bitcoin’s role as a store of value. As well, the World Bank El Salvador’s request for help on BTC transition. 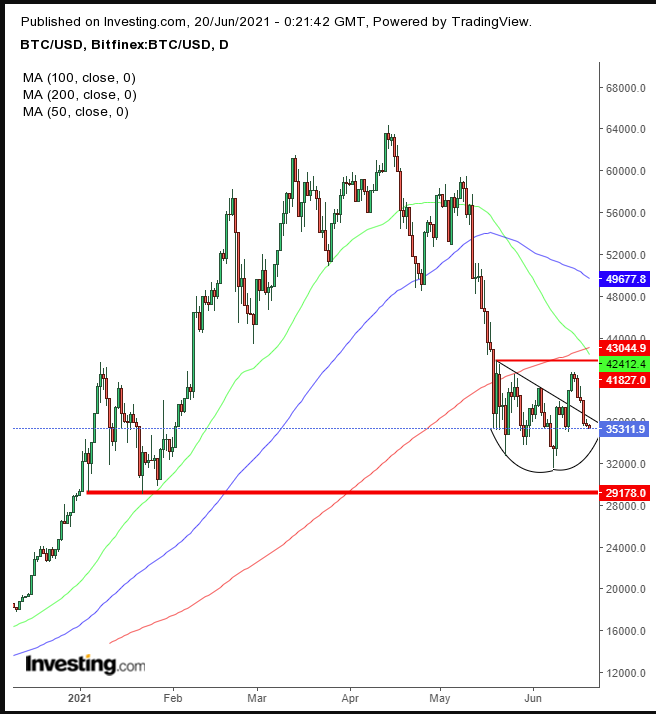 BTC/USD is being pressured by a Death Cross, even as the digital token is trying to complete a round bottom at the January low. Failure to remain above $29,000 will likely see a deeper plunge, while a push above $43,00 could test the April all-time high.

advanced for the fourth week in a row on strong global demand. Worldwide consumption is 97 million barrels a day, according to Goldman Sachs. Moreover, a post-lockdown summer, in which travel resumes with a vengeance after consumers spent more than a year sheltering in place, could see incredibly tight WTI supplies. However, a selloff in risk assets is likely to weigh on oil prices too. 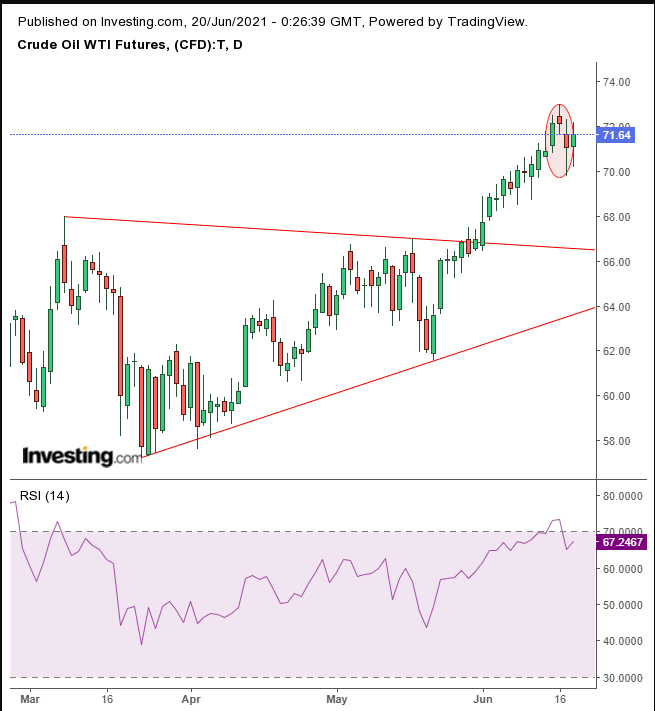 Friday’s crude oil uptick retests the evening star, an ideal short position for aggressive traders who don’t mind going against the trend and are counting on a return-move to a bullish triangle. The RSI has dipped after reaching the most extreme overbought condition since the triangle began.

All times listed are EDT