When you think about dividend stocks, it’s very easy to simply look at the posted yield and figure that the best stocks have the highest yields.

You might want to reconsider this. Dividend yield is one important piece of total return, but you can’t leave out price growth. This is why choosing dividend-paying stocks with price appreciation potential is vital to a successful portfolio strategy. Here, we’ll look at five dividend-paying stocks that have a proven track record of increasing their dividends as well as a strong position for price growth.

AT&T (NYSE: T) has faced high debt loads and aggressive writedowns in the wake of its flailing DIRECTV acquisition. But it’s currently offering a dividend yield of around 7%, and its stock is trading about 25% off its highs over the last two years.

It is making a very big bet on the ultimate success of HBO Max, and with the continuation of cord-cutting, it would be no surprise to see the premium streaming service dominate in the future. AT&T’s business lines of focus, apart from HBO Max, include 5G and fiber — two segments for which it hopes to become market leaders. AT&T’s dividend payout ratio is expected to be in the mid-50s for 2021, leaving it with excess free cash flow to reduce its debt in the years going forward.

A dividend yield at 4.5% along with a current price around $50 (about 40% off its previous highs) makes Walgreens Boots Alliance (NASDAQ: WBA) an interesting player in this conversation. Margins suffered in 2020 due to increased costs associated with the pandemic, as EPS fell nearly 88% to $0.52. But free cash flow increased 5.6% to $4.5 billion, a sign of strength despite weak profitability.

In its most recent press release, Walgreens raised its 2021 guidance following several positive earnings surprises, moving its annual growth expectation from the low single digits to the mid-high single digits. Notably, the company recently made a majority investment in pharmacy automation leader iA, which seeks to streamline the refill process. In an effort to develop alternative income streams, Walgreens has also announced that it will launch a digital bank with a range of card services. Walgreens has continued to prove itself with its profitability and its innovate bend, despite a weakened share price. 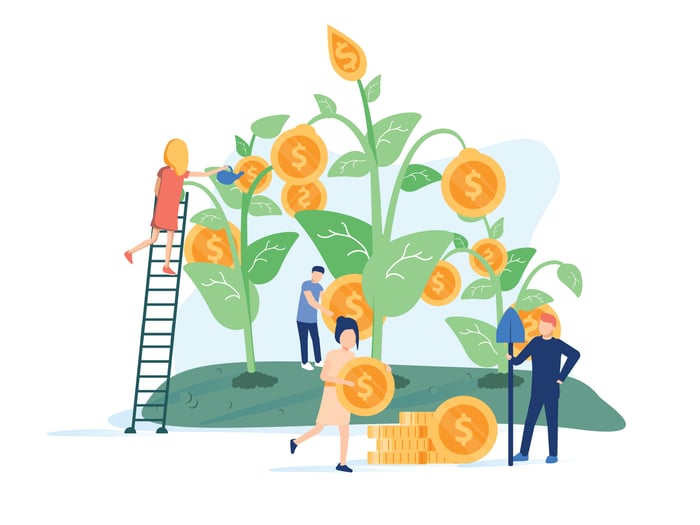 IBM (NYSE: IBM) has traded horizontally for much of the past five years, while the S&P 500 has logged extremely solid gains. However, a broad business restructuring, along with a dividend yield just under 5%, makes the company a candidate to provide reliable income and experience price growth simultaneously.

The company has had strong free cash flow, generating $11 billion in 2020, and its potential within the artificial-intelligence and cloud-performance realm remains its biggest opportunity. Hybrid cloud (infrastructure combining at least one public cloud with one private cloud) is said to be a $1 trillion dollar market, with only about 25% of workloads having been transferred to public clouds. Given its position as a dividend stalwart and a leader in emerging technologies, it’s easy to see why buying IBM at a discount makes sense.

People’s United Financial (NASDAQ: PBCT) has a unique distinction: Despite the financial crisis in the late 2000s, the company has still managed to increase its dividend for over 25 years and become a Dividend Aristocrat. People’s United boasts a dividend yield of 4.5% and a potential for revenue increases in the future as interest rates climb.

Perhaps most notably, People’s United recently announced its agreement to be acquired by M&T Bank (NYSE: MTB), a worthy partner in the regional banking world of the Northeast. M&T hopes to close on the deal to acquire People’s United by the end of 2021, though it’s worth considering the merged entity as a long-term hold: M&T is also one of the few banks that didn’t cut its dividend during the financial crisis, either.

People’s United shareholders will own about 28% of the combined entity, which will boast a wider footprint but extremely similar values when it comes to paying shareholders.

Having increased its dividend for over 50 years, Black Hills (NYSE: BKH) is now regarded as a Dividend King. Prior to the pandemic, the stock had traded in the mid-$80s before crashing and then working its way back up to the mid-$60s; there is likely much more room to run here.

Black Hills recently increased its EPS guidance from a high-end estimate of $3.95 to $4.00 per share, citing no material net impact from COVID-19 as well as production tax credits of $20 million from wind generation assets . Stable profitability across the electric utility, gas utility, power, and mining segments — in addition to a renewed commitment to clean energy generation — make this dividend stalwart a stock to own.

Know what you’re paying for

Volatile stocks often advertise high dividend yields to attract income investors, but buyer beware. Stocks that offer 10% yields but have unstable business models can reduce or eliminate dividend payments at the drop of a hat. This is why it’s so important to evaluate the entire stock — not just its dividend — before diving in. As with any investment, be sure to add dividend stocks to your portfolio in the context of your broader financial and tax situation.

10 stocks we like better than AT&T
When investing geniuses David and Tom Gardner have a stock tip, it can pay to listen. After all, the newsletter they have run for over a decade, Fintech Zoom Stock Advisor, has tripled the market.*

David and Tom just revealed what they believe are the ten best stocks for investors to buy right now… and AT&T wasn’t one of them! That’s right — they think these 10 stocks are even better buys.

XRP price – Has the rally ended for altcoins like LINK, ADA, and NPXS?

Roku Stock – Bumble’s Debut Has Been a Buzz Kill

FSLY – 2 Fantastic Growth Stocks to Buy for May

T Stock – Should You Buy Novavax Stock After A Large 18% Fall In 5 Days?