Dozens of Deliveroo drivers have taken to the streets of London as part of industrial action over pay and conditions.

Workers dressed in the instantly recognisable colours of the takeaway giant took their bicycles and mopeds on a detour through the centre of the city earlier.

The company insisted those taking action represented a ‘tiny minority’ of its workforce and say most are happy with the ‘flexibility’ the role offers.

It comes as part of an ongoing debate over the ethics of the so-called ‘gig economy’ after Uber drivers won a supreme court battle to get themselves classed as workers.

The Independent Workers’ Union of Great Britain (IWGB) said hundreds of its members went on strike as part of its campaign for more pay and improved employment rights and safety protections.

Deliveroo – which recently underwent a rocky stock market debut -treats all riders as ‘self-employed’ and insists they can choose their hours.

Shares in the company climbed higher on the first day of full trading on Wednesday, after £2bn was wiped off the value within 20 minutes of its listing last week.

The initial poor performance on the stock exchange is thought to have been partly down to some investors staying away because of concerns over how drivers are treated. 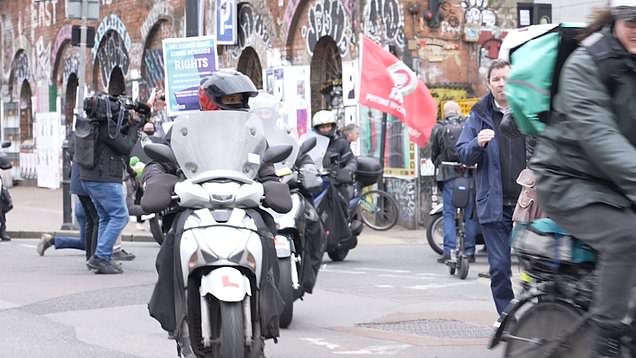 To view this video please enable JavaScript, and consider upgrading to a web
browser that
supports HTML5
video

Around 60 employees joined a protest in London, including Jake Thomas, 21, who has worked for Deliveroo for three years.

‘The over-hiring of staff has affected things drastically – there’s less jobs for us full-time employees.

‘The pay has dropped, we don’t get paid for waiting, and we also have to pay expenses, so it all adds up.’

Deliveroo employs around 100,000 riders across 12 countries. It said it surveyed 8,500 riders on Tuesday and 89% said they were satisfied working for the company.

When asked what are the most important factors when working with Deliveroo, the top answer was ‘Working when I like’, followed by ‘Working where I like’ and ‘The ability to choose which orders I accept’, said Deliveroo.

A spokeswoman said: ‘This small self-appointed union does not represent the vast majority of riders who tell us they value the total flexibility they enjoy while working with Deliveroo alongside the ability to earn over £13 an hour.

‘Only yesterday we ran a survey and 89% of riders said that they were happy with the company and flexibility was their priority.

‘We are proud that rider satisfaction is at an all-time high and that thousands of people are applying to be Deliveroo riders each and every week.

‘Riders are at the heart of our business and today we are beginning a new consultation with riders about how we should invest our new £50 million community fund.’

Get in touch with our news team by emailing us at webnews@metro.co.uk.

For more stories like this, check our news page.

Get your need-to-know
latest news, feel-good stories, analysis and more

Netflix Stock – Netlix Options are Too Inexpensive to Sell

AMD Stock – Arm Holdings takeover: has Nvidia had its chips?

Uber Stock – Could SoftBank’s Recent Success Be the Undoing of CPNG Stock?