One year ago this month, our world changed in some pretty dramatic ways.

Take the stock market. Stuck at home and $1,200 richer thanks to the first coronavirus relief bill, millions of millennials and Gen Zers tried their hand at investing for the very first time. It’s estimated that some 10 million new brokerage accounts were opened in 2020, a record. Robinhood, the commission-free trading app, signed up 3 million new users in the first four months alone.

There are signs that these “amateur” investors aren’t going away any time soon. According to Credit Suisse, retail investors now account for a third of all U.S. stock trading volume, or almost as much as mutual funds and hedge funds combined.

The Reddit-fueled “meme stock” rally is proof positive that this new formidable army of tech-savvy traders has the firepower to move markets and even kneecap multibillion-dollar hedge funds.

Early on in 2020, I think a lot of seasoned, more “sophisticated” market participants were too quick to dismiss these first-time millennial and Gen Z investors. More educated than past generations and well connected, they saw the pandemic-triggered stock pullback as an opportunity to buy shares of distressed travel and tourism companies.

That includes airlines. Before the pandemic, the combined weekly trading volume of American, United, Delta and Southwest averaged about 100 million shares. At the end of March 2020, weekly volume hit 660 million shares. By early June, after Warren Buffett announced he had sold all his airline positions, it was a massive 1.8 billion shares. 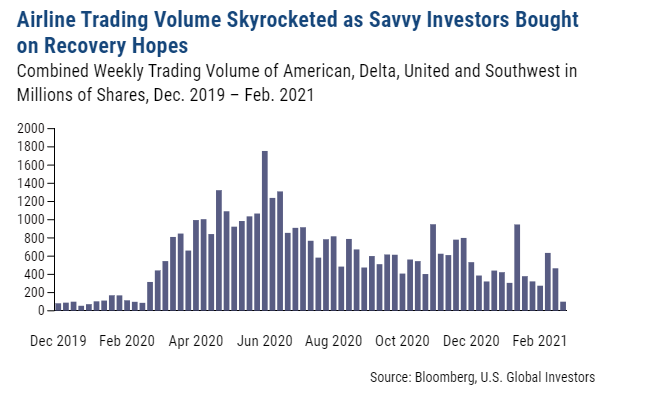 But Were They Good Trades?

American, United, Delta and Southwest have all more than doubled since Buffett made the decision to sell his shares in the big four carriers. Investors who put $10,000 in a basket of global airline stocks on May 4, 2020, would have seen the value of their portfolio grow to approximately $21,300, according to Morningstar data. 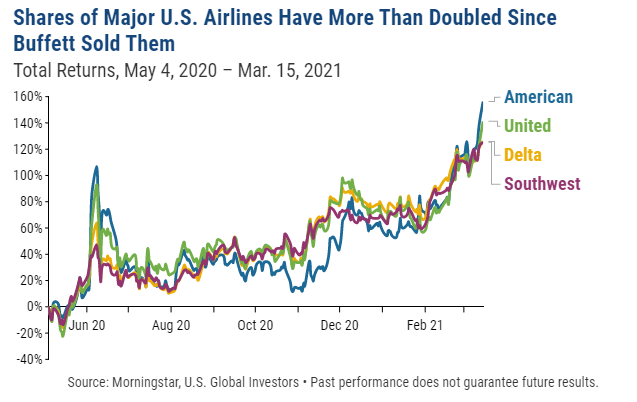 No disrespect intended toward Buffett. He’s always been a numbers guy, and at 90 years old, his appetite for risk is quite a bit lower than a thirtysomething Robinhood trader.

These are precisely the types of investors who bet big on airlines recovering—and were rewarded for it.

We’re already starting to see a substantial rebound in commercial flight demand, driven primarily by leisure travel. According to the Transportation Security Administration (TSA), close to 1.4 million passengers were screened at U.S. airports on Friday, March 12, representing the greatest volume for a single day since March of last year. In the first half of this month, nearly 16.5 million total passengers boarded commercial jets in the U.S., the most for any month since last March. 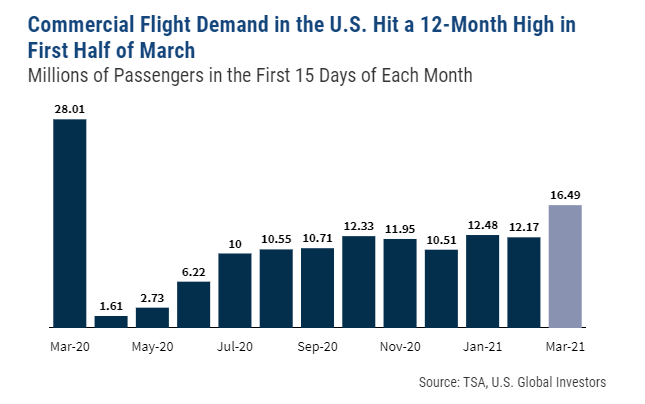 Before the pandemic, approximately 2.2 million people were cleared by the TSA per day, with international arrivals and departures making up the bulk of the volume. A year later, domestic leisure travel is beginning to recovery while international flights remain muted due to lockdowns in Canada, the European Union (EU) and elsewhere.

The rate at which vaccines are being administered is accelerating in the U.S., which is highly constructive for travel and tourism in general and airlines specifically. The Biden administration recently directed all 50 states to make every adult aged 18 and over eligible to receive the COVID-19 vaccine by May 1 of this year. Anticipating a summer surge, a number of domestic low-cost carriers, including Southwest and Allegiant, have announced plans to expand their networks.

United Airlines became the first U.S. carrier to say it expected to be cash flow positive this month for the first time since the pandemic began. Other carriers have likewise signaled their optimism going forward as vaccinations continue to ramp up.

Millennial and Gen Z participation in the stock market will likewise continue to ramp up. I see this as a highly positive thing.

Again, this cohort is highly educated. Compared to earlier generations, they tend to delay getting married and starting families, meaning they may have more time to build capital with which to invest.

They’re well connected and get a lot of their investing ideas from social media and friends and family. According to a recent survey conducted by MagnifyMoney, 40% of millennials and 44% of Gen Zers get investing advice and information from YouTube, which I also frequently use. 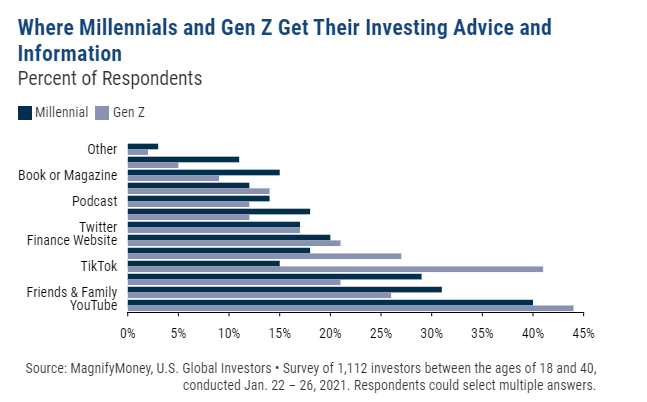 Some of you reading this may still picture millennials as being just out of high school. The truth is that the oldest members of this group turn 40 this year. Historically, Americans reach their peak earning years between 45 and 54, so it’s incumbent upon this generation—the largest in the U.S. right now at 72.1 million—to keep the bull market running. 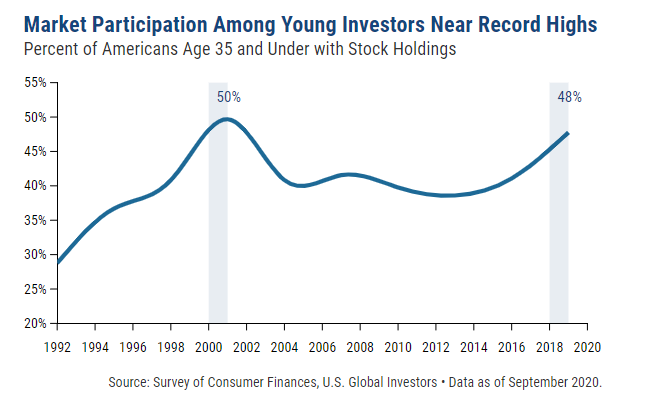 The good news is that market participation among young Americans is rising. In 2019, the most recent year for data, 48% of Americans age 35 and under held stocks. That’s near the record of 50% set in 2001, around the time that the dotcom bubble burst.

With the incredible influx of first-time investors last year, I’m certain that well more than half of this age bracket now has stock holdings, either directly or indirectly.

Some links above may be directed to third-party websites. U.S. Global Investors does not endorse all information supplied by these websites and is not responsible for their content. All opinions expressed and data provided are subject to change without notice. Some of these opinions may not be appropriate to every investor.

Holdings may change daily. Holdings are reported as of the most recent quarter-end. The following securities mentioned in the article were held by one or more accounts managed by U.S. Global Investors as of (12/31/2020): American Airlines Group Inc., Southwest Airlines Co., Delta Air Lines Inc., United Airlines Holdings Inc.