Tesla Stock – Can the stock market climb some more before January ends?

Home » Tesla Stock – Can the stock market climb some more before January ends?

Tesla Stock – Can the stock market climb some more before January ends?

The S&P 500 is one of the main benchmarks used to measure the overall performance of the US stock market. It has been treading water around the 3850 mark since 20th January, as investors await clearer signs about whether to push stocks higher or lower.

To be clear, this blue-chip index has climbed 2.5 percent already so far in 2021. At the time of writing, the futures contracts for the index are edging higher, which suggests that the S&P 500 is set to open flat when US markets begins regular trading for its Wednesday session. 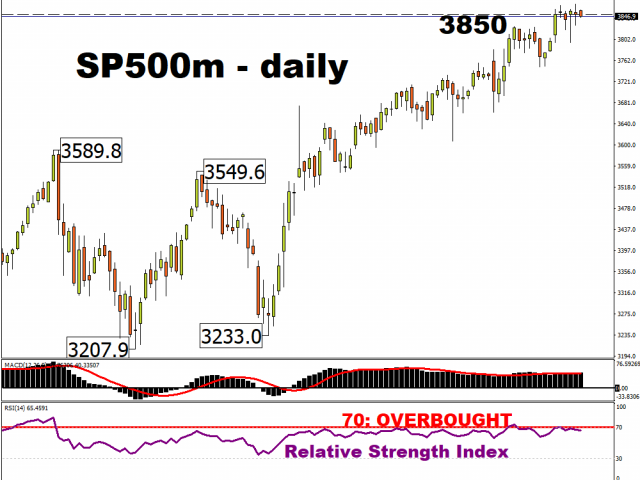 Investors could get a big, F.A.T. signal today.

Facebook, Apple, and Tesla are all set to announce their latest quarterly earnings respectively after US markets close on Wednesday. Note that the total value (market capitalization) of these 3 companies combined exceeds $4 trillion, which is nearly 12% of the S&P 500’s total market cap of $34 trillion.

Investors have been flocking to these stocks of late in anticipation of some stellar financial results from the final three months of 2020.

The buying spree has led to some fascinating stats on these stocks:

– Markets expect an absolute move (either up or down) of 7.55% the day after earnings announcement

– Markets expect an absolute move (either up or down) of 7.6% the day after earnings announcement

– Markets expect an absolute move (either up or down) of 7.86% the day after earnings announcement

And just because investors have already been pricing in some of the expected earnings, it does not mean the stock does not have any more room to climb in the immediate term.

Take Microsoft for example. Even though investors had been expecting some excellent numbers from its Q4 performance (which was just announced a few hours ago after US markets closed on Tuesday), the software giant’s stocks still popped by as much as 6.5 percent in late trading, even after closing the regular Tuesday session at a new record high!

Of course, it helped that Microsoft’s results came in better than expected.

Hence, Facebook, Apple, and Tesla similarly may require such positive surprises to help push the S&P 500 higher. That also assumes that non-tech stocks on the S&P 500 don’t go too far in the opposite direction today.

And then, there’s the Federal Reserve.

The US central bank is in the midst of a two-day meeting which began yesterday, and the Federal Open Market Committee is due to announce its policy decision later today. Investors will be paying very close attention to the words of the central bank chief, Jerome Powell.

The Fed chair has to convey to the markets that policymakers will be very careful about when they unwind some of its support for financial markets.

For reference, besides cutting benchmark interest rates to near-zero, the Fed has been buying about $120 billion worth of bonds per month to help the US economy amidst the pandemic.

As the US economy recovers, due in part to the vaccine’s rollout, the central bank is bound to eventually pull back on some of that bond-buying. Global investors are very eager to find out when, and how, the Fed will do so.

One wrong move or a slip of the tongue on Powell’s part could cause a massive jolt to global financial markets, with investors fearing a repeat of the infamous ‘taper tantrum’ of 2013.

As long as the Fed chair does his job right today, and conveys with conviction the central bank’s intentions in a calm and clear manner, US stock markets could see more gains over the coming sessions.

Bitcoin - Scaramucci Says the GameStop Phenomenon Is Positive for Bitcoin