Tesla Stock – Riding With the King Midas of Wall Street

Tesla Stock – Riding With the King Midas of Wall Street

A few weeks ago, I related the bizarre story of a microcap stock that was mistakenly believed to be endorsed by Tesla (NSDQ: (TSLA)) CEO Elon Musk. On Friday, January 8, Signal Advance (OTC: SIGL) opened at $4.25. Over the weekend, Musk tweeted to his 42 million followers the cryptic two-word message, “Buy Signal.”

On Monday, SIGL soared above $70 as the trading algorithms that follow Musk’s every word misinterpreted Musk’s tweet as an endorsement of the company. Turns out, Musk had a different business in mind. He was referring to a private messaging service by a similar name that is unrelated to the publicly traded stock.

Within a few days, SIGL retreated below $7. The algorithms that bought that stock took a bath. You might think they would learn their lesson from that experience, but apparently not.

On the same day that SIGL was soaring up the charts, another story surfaced regarding Tesla. This time, the company was rumored to be negotiating a joint venture with Tata Motors (NYSE: TTM) to build its electric vehicle (EV) product line for distribution in India where Tata is headquartered.

That day, TTM jumped 16%. The following week, it was up more than 50% from where it began the month. That works out to roughly $4 billion in additional market cap thanks to the gravitas of Musk’s name. 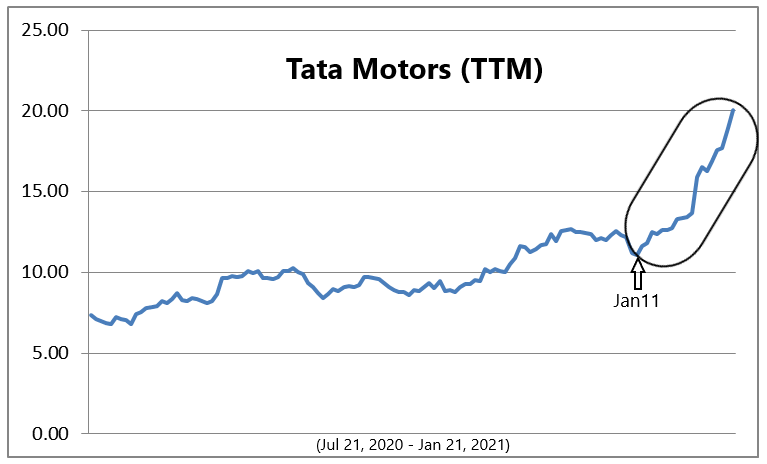 So far, neither company has confirmed the rumor. Tata issued a statement denying the rumor, but so far nobody is buying it.

That doesn’t matter to the trading algorithms that are programmed to act on any deal involving Musk. Over the past 12 months, Tesla stock has appreciated more than seven times in value. If Musk likes a company, then that is good enough for them.

The Man That Can Do No Wrong

That makes Musk the King Midas of Wall Street, where every company he touches turns to gold. He is the man that can do no wrong in a stock market that will only go up.

At least, he is for now. Not that long ago, that person was Jeff Bezos, the founder and CEO of Amazon.com (NSDQ: AMZN). Bezos is still extremely influential, but he is no longer considered infallible.

At one time, any company that stood in Amazon’s way was shunned by Wall Street as a near-certain loser. But over time, several big-box retailers such as Target ((NYSE:TGT)), Walmart (NYSE: WMT), and Best Buy proved that they could stand up to Amazon.

Musk has the opposite effect as Bezos. Any company he likes is considered a can’t-miss winner. Even some of his competitors have benefited from his aura, such as Chinese EV manufacturer NIO (NYSE: NIO). Over the past year, NIO has gained more than 1,000%.

For that reason, it is understandable why a rumor involving Tesla would spark interest in Tata. If true, Tata stands to make a lot of money making and distributing Tesla’s EVs in India.

I have owned Tata Motors in the Personal Finance Growth Portfolio for the past four years. Until recently, all it had ever done since then is lose value. So, I’d love for the Tesla rumor to be confirmed as true.

However, if the rumor turns out to be false then that could be bad news for Tata. While you might want Musk as your business partner, you definitely do not want him as your rival.

For that reason, I do not recommend taking the algorithmic approach of buying every stock that may in some way be connected to Tesla. As we witnessed with Signal Advance, the cost of doing so can be quite steep.

Instead, I suggest buying the entire industry. You can do that by owning shares of the Global X Autonomous & Electric Vehicles ETF (DRIV). Its top five holdings include Tesla and NIO.

You may be surprised to learn that only 37% of the fund’s assets are devoted to automobile manufacturers. Another 31% is invested in information technology companies such as Qualcomm (NSDQ: QCOM), Apple (NSDQ: AAPL), and Alphabet (NSDQ: GOOGL). Businesses in the materials, industrials, and communication services sectors make up the remaining 32%.

However, you don’t buy EV stocks because they are cheap. You buy them because you believe they will dominate the market in the years to come.

Three years ago, many analysts felt Amazon was overvalued when its share price crossed above $1,000. The company barely made a profit and reinvested most of its free cash flow back into future growth. AMZN is now trading near $3,300 as it continues to expand into new markets.

That appears to be the model that the EV industry is following. And as long as investors are willing to be taken for a ride, there is no reason to change direction.

Editor’s Note: As the above article makes clear, you need to be selective with your investments.


The economy is improving, stocks are rallying, and the roll-out of vaccines provides hope that we’ll get the coronavirus pandemic under control. But we’re not out of the woods…not by a long shot.

That’s why our investment team has put together a special report: “5 Red Hot Stocks to Own in 2021.” In this report, we provide the names and ticker symbols of the highest-quality stocks to own for the new year. Click here for your copy.

BofA – Bank of America had good and bad news on bonuses

Tesla Stock price – Cathie Wood Has a New Tesla Target price Soon. Here’s Where It Might Be.

BofA - Bank of America had good and bad news on bonuses