Tesla Stock – TSLA Could Catch a Break, According to Bull Signal

Home » Tesla Stock – TSLA Could Catch a Break, According to Bull Signal

Tesla Stock – (TSLA) Could Catch a Break, According to Bull Signal

Tesla Inc ((NASDAQ:(TSLA))) has made headlines recently thanks to CEO Elon Musk’s comments regarding cryptocurrencies such as dogecoin and bitcoin. After announcing the company would no longer accept bitcoin as a form of payment for its cars amid concerns of the environmental impact of its mining, both (TSLA) and bitcoin pulled back. Now, Tesla is back in the news once more, after Musk today said the company has not sold any of the crypto, despite the aforementioned concerns.

At last check, Tesla stock was down 3.8% to trade at $567.23, adding to its 19% year-to-date deficit. Guided lower by the 10-day moving average, (TSLA) is on track to log its fourth-straight close under $600 — something the equity has avoided since November 2020. Despite its shaky performance on the charts of late, investors shouldn’t swear off the stock just yet, as it has pulled back to another trendline with historically bullish implications.

Specifically, (TSLA) has come within one standard deviation of its 200-day moving average following over a year of trading above the trendline. The equity has seen one similar pullback within the past three years, and gained an impressive 73.2% return one month later in that instance. 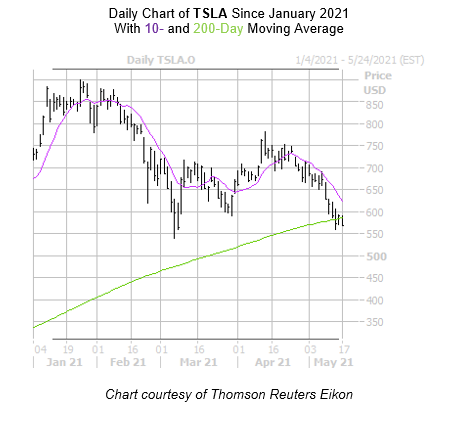 A short squeeze still looks like it could give the electric car manufacturer a boost. Short interest jumped 19.2% in the most recent reporting period, and the 41.38 million shares sold short account for a whopping 23.1% of the stock’s available float. And put buying is still all the rage. Data from the International Securities Exchange (ISE), Chicago Board Options Exchange (CBOE), and NASDAQ OMX PHLX (PHLX) shows the security with a 10-day put/call volume ratio of 1.00. This ranks higher than all other readings in its annual range, meaning puts are being bought at their fastest rate in 12 months.

What’s more, options traders are pricing in relatively low volatility expectations at the moment, per the stock’s Schaeffer’s Volatility Index (SVI) of 57% which sits higher than just 9% of all other annual readings. Plus, (TSLA)‘s Schaeffer’s Volatility Scorecard (SVS) ranks at a high 93 out of 100, meaning the equity has tended to exceed these expectations during the past year.

Tesla Stock – (TSLA) Could Catch a Break, According to Bull Signal

Slowly But Not Surely: Airline Leisure Travelers Coming Back, But Not Business Travelers. International Still Crushed

Loans Online - Personal loan vs. credit card — when to use each one