Ursula von der Leyen – DOMINIC SANDBROOK: The incompetent Eurocrats are in a horrible hole. So why are they STILL digging?

For politicians across the world, the past 12 months have brought challenges few could have imagined. And inevitably, every government has made its share of mistakes.

But for some people, determined to hold up a magnifying glass to Britain’s failings, there has always been a shining beacon of honesty and competence — the EU.

Time and again, they insisted that France, Germany and their Continental neighbours put Britain to shame.

Our politicians were blinkered, incompetent and corrupt. The European elite were paragons of clear thinking and straight talking.

Does anybody still think this, after the past few days? Does anybody really still believe it after yesterday?

‘Despite her pompous presidential title, Mrs von der Leyen (pictured)  is not a serious politician’

The EU’s vaccine shambles has been well chronicled, from its failure to sign a timely deal and secure supplies to its mendacious attempts to blame the British/Swedish pharmaceutical company AstraZeneca and its ham-fisted attempt to close the Irish border.

So I don’t intend to rehearse all the gory details.

What has shocked me, though, is that instead of apologising, the Brussels elite have doubled down on their mistakes and evasions.

Having found themselves in a hole, they have been digging more furiously than ever.

In the past couple of days the examples have piled up — and by a remarkable coincidence, many tried to paint Britain as the villain of the piece.

Let’s start at the top. Facing furious criticism for her mishandling of the pandemic, the EU Commission president, Ursula von der Leyen, insisted yesterday that she had done nothing wrong. 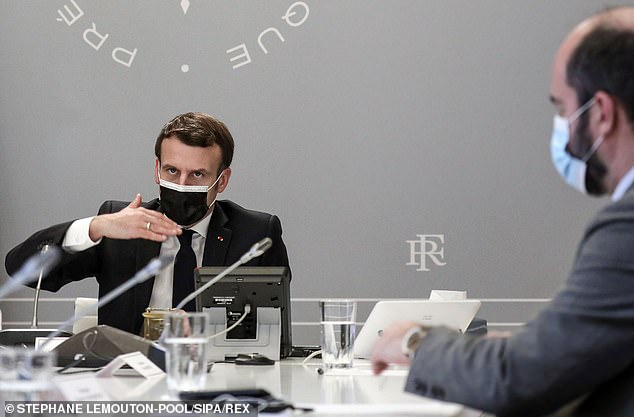 ‘The French president (pictured) and his allies are deliberately lying about the vaccine, to protect their poll ratings’

The EU was not too slow, she said. Instead Britain had been too fast, having ignored the necessary ‘safety and efficacy requirements’ before authorising the vaccines.

Is there any truth in this? In a word: no. Not a single credible scientist supports this allegation.

Britain did not cut corners. Nor did other countries racing ahead with their vaccination drives, such as Israel. And as we know, on the available evidence, the Oxford/AstraZeneca vaccine is as safe as can be.

To put it bluntly, then, Mrs von der Leyen was either lying or had been falsely briefed. 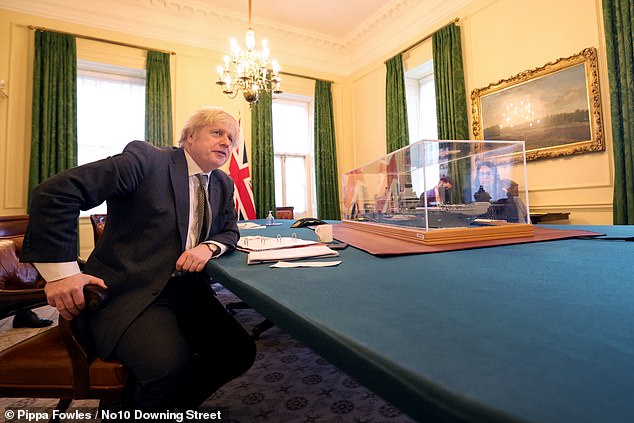 ‘Among the high-minded tribe of ultra-Remainers, the EU is wonderful, and Boris is wicked, and that’s all there is to it’

Despite her pompous presidential title, Mrs von der Leyen is not a serious politician.

Most German commentators see her as a serial failure, whose time as their defence minister was blighted by her risible inability to arrange proper aircraft procurement.

She was parachuted into the Commission presidency as Angela Merkel’s creature, a pliant puppet who would do her mistress’s bidding. But if Mrs Merkel had known what was coming, she would surely have made a better choice.

Indeed, it’s telling that the German Chancellor has now begun to place vaccine orders outside the EU system, including 27 million doses from the U.S. firm Moderna, much to the fury of her EU partners.

There have even been calls for Germany to follow Hungary’s lead and order the Russian or Chinese vaccine.

Mrs Merkel is no fool. She knows the EU process has catastrophically failed. Why would she allow her final months to be ruined by an avoidable failure to vaccinate her people?

But while she had the common sense to keep quiet, other European leaders behaved very differently — chief among them France’s Emmanuel Macron, self-appointed scourge of the British.

It was Mr Macron, unforgivably, who claimed last week that the Oxford/AstraZeneca vaccine was ‘quasi-ineffective’ for people over 65. But he offered no proof — not surprising, because there isn’t any. 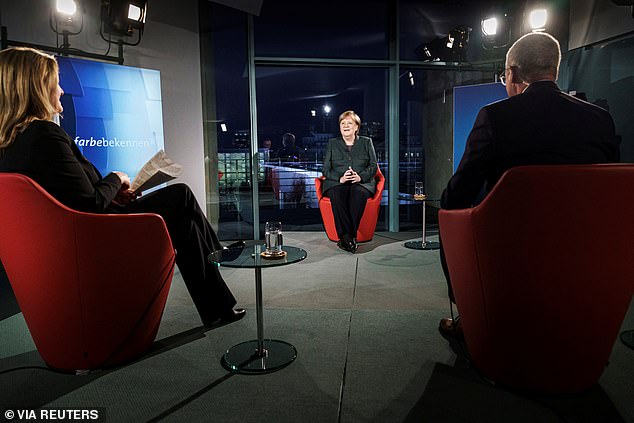 ‘Mrs Merkel (middle) is no fool. She knows the EU process has catastrophically failed’

His motives were obvious. Plummeting in the polls, embarrassed by the total failure of his own Sanofi vaccine, humiliated by the wretched inadequacy of his vaccination policy, this bargain-basement Bonaparte was desperate to discredit the success of the ‘Anglo-Saxon’ vaccine.

Again, it is worth stressing that Mr Macron was not telling the truth. The vaccine does work for over-65s, whatever this Parisian Pinocchio thinks.

And yet on Monday, his ally, France’s Europe minister Clement Beaune, doubled down on his baseless allegations. The British, he said witheringly, are ‘taking many risks with the vaccine campaign’, to make up for our own ‘extremely difficult health situation’.

What risks? Can Mr Beaune name a single scientist who agrees with him? Of course not.

Just pause for a moment to consider how despicable all this is. With deaths mounting every day, the French president and his allies are deliberately lying about the vaccine, to protect their poll ratings.

As former Portuguese politician Bruno Macaes remarked yesterday, who would have believed that ‘European officials and politicians’ would become ‘the main global source of pandemic disinformation’?

According to Mr Selmayr, it is unfair to criticise the EU for its vaccination failure. After all, he said contemptuously, ‘in Africa only 20,000 people have been vaccinated’.

It’s hard to know where to start. Is Africa — the poorest continent on Earth — really the EU’s yardstick, rather than Britain or the U.S.?

The tragedy of all this, of course, is that it comes as a punishing human price. No country has handled the pandemic perfectly.

But as Mr Macaes wrote, the EU’s incompetence, and the mendacity of Mr Macron and his cronies, will exact ‘a very high cost in lives, prestige and further economic losses’.

And there is, I think, an even deeper issue here. The EU’s vaccination shambles has laid bare all the institution’s greatest weaknesses.

The Commission is too slow and sclerotic. Its senior figures tend to be complacent mediocrities, incapable of decisive or imaginative thinking.

The entire apparatus rests on the fiction of high-minded, dewy-eyed Continental solidarity. Yet in a crisis, most people look to their own national government, not to Brussels.

Most could not care less about their ‘partners’ hundreds or thousands of miles away.

But in some quarters, almost incredibly, the EU can still do no wrong. With comically bad timing, one Guardian columnist chose yesterday as the perfect day to publish yet another tirade about the folly of Brexit.

Among the high-minded tribe of ultra-Remainers — or ‘Rejoiners’ as they now call themselves — nothing will ever shake the true faith. The EU is wonderful, and Boris is wicked, and that’s all there is to it.

As a former Remain voter — albeit an increasingly shamefaced one — even I can see something is desperately rotten at the heart of Brussels.

And if I were still a citizen of the EU, I would be simmering with rage at the incompetence and mendacity of my leaders.

After all, ask yourself this. Where would you rather wake up tomorrow? Brexit Britain, where more than ten million vaccine doses have been administered, with supplies pouring in and millions more waiting to join them?

Or in the EU’s chief cheerleader, France, where the total stands at barely 1.5 million, supplies are short and barely half of the population have any intention of having the jab anyway?

I know my answer. I bet I know yours, too.

Justin Trudeau – Don Martin: Made-in-Canada vaccines are coming — just in time for the next pandemic

Justin Trudeau - Don Martin: Made-in-Canada vaccines are coming -- just in time for the next pandemic