Vaxart (NASDAQ:VXRT) stock is a high-risk Covid-19 vaccine play. But unlike some other small-cap long-shots, like Ocugen (NASDAQ:OCGN), it has a lot more going for it. 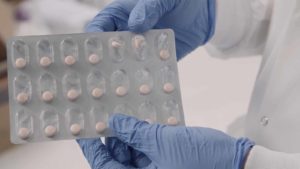 For starters, developing its candidate itself, unlike Ocugen, this clinical-stage biotech company has more avenues to find success even if it fails to find it in the United States.

Second, it’s not necessarily “game over” if it fails completely in bringing this oral vaccine candidate to market. The prospects of these non-Covid candidates could help prevent shares from collapsing.

Third, it’s already disappointed investors this year, with the mixed Phase 1 results for its vaccine tablet. Hope and hype are factored into its valuation, but perhaps not at the level seen with other names.

On further developments, speculators could dive back in, sending it much higher than where it trades today.

It’s a gamble for sure and something you don’t want to make a big position in your portfolio. Yet among the vaccine long-shots, it may be your best choice.

The front-runners have already crossed the finish line in the vaccine horse race.

As you know, there are several winners including Johnson & Johnson (NYSE:JNJ), Moderna (NASDAQ:MRNA), and Pfizer (NYSE:PFE), but that doesn’t mean also-rans like Vaxart are completely out of the running.

It may not be mid-field like Novavax (NASDAQ:NVAX), but as mentioned above it’s in a much better position than long-shot names like Ocugen.

Again, unlike that other also-ran, which is licensing its Covaxin candidate from its developer, India-based Bharat Biotech, Vaxart owns fulls rights to its candidate.

This opens the door for it to license it out to a large pharma company, once it makes progress with clinical trials. It also allows it to pursue opportunities outside of developed economies like the U.S. The three vaccine winners have the North American market locked up.

That’s why it seems like a pipe dream that Ocugen’s Covaxin will generate big sales, even if it gets approved.

Vaxart, on the other hand, could find success selling this vaccine to the developing world, which as our Louis Navellier recently discussed, is in greater need of a vaccine that’s stable at room temperature.

Even if its Covid endeavor is a full-on bust, it still may not be a “look out below” situation for VXRT stock.

The prospects of its other oral vaccine candidates may be sufficient to prevent shares from going into free-fall if it happens to throw in the towel with its current flagship one.

Shares Could See a Spike in price

After discussing why Vaxart’s downside risk may not be as substantial as it appears, let’s break down its level of potential upside.

It’s still a long way from moving its contender through the approval pipeline. Yet between now and then there may be developments that allow the stock, trading for under $9 today, to experience a big spike that makes diving in right now worthwhile.

Shares have seen some small boosts recently. For example, the pop it received from news of the Food and Drug Administration (FDA) clearing its Investigational New Drug, or IND, application.

Granted, it’s a bit chancy to buy VXRT stock, just on the potential for it to rally once again. Investors who prefer to buy based on fundamentals will likely want to stay away.

The potential of its pipeline makes up the bulk of its valuation. Its $1.1 billion market capitalization is leaps and bounds above the $184.6 million in cash it has on hand. This valuation also in no way is based upon its current operating results (trailing twelve-month revenues of just $1.25 million, and trailing net losses of around $54.1 million).

But again, if you’re looking to roll the dice on a vaccine stock that hasn’t taken off? This may be the play.

The Bottom Line on Vaxart

As a small-cap stock, Vaxart has the potential to see “to the moon” moves you’re looking for in a high-risk play. At the same time, it’s not finding itself backed into a corner.

Vaxart could find success with its Covid-19 vaccine either in the U.S. and/or overseas. It also has a diverse pipeline, which means it’s far from “game over” if this candidate doesn’t take.

If you’re looking to wager on a vaccine long-shot, place your bet on VXRT stock.

On the date of publication, Thomas Niel did not have (either directly or indirectly) any positions in the securities mentioned in this article. The opinions expressed in this article are those of the writer, subject to the InvestorPlace.com Publishing Guidelines.

Thomas Niel, contributor for InvestorPlace.com, has been writing single-stock analysis for web-based publications since 2016.

Vaxart to Present at the 2021 Cantor Virtual Global Healthcare Conference on Thursday, September 30