Verizon’s ill-fated acquisitions of AOL and Yahoo, made in an attempt to challenge Facebook and Google’s dominance in digital advertising, mark one of the great lost bets in telecoms.

Yet several years on from the $9bn wager, America’s largest telecoms company may finally collect some winnings as its restructured media business — which includes Yahoo Sports and its Fantasy Football league, coupled with its streaming of National Football League games — provides it with a springboard into the booming US sports betting market.

In what is a relatively rare foray by a telecoms group into the gambling sector, Verizon has teamed up with BetMGM, a joint venture between casino operator MGM and UK betting company Entain, and gradually expanded its betting services to nine states over the past 18 months.

Guru Gowrappan, a former Alibaba executive who has led Verizon’s media division since 2018, described the push as “closing the loop” as it seeks to capture more value from the 900m users of its digital services. The theory is that there are millions of loyal users of its sports and fantasy brands who could be tempted to stay and bet within those apps, rather than leaving to use other gambling services.

“We know you consume sports scores and content [and] you also use Yahoo Fantasy sports, which is more like gaming. The next step for you is to go bet,” he told the Financial Times.

The move makes America’s largest telecoms company a player at the growing table of those who have built sportsbooks after the US Supreme Court overturned a federal bill banning the practice in 2018 — pitting it head on with gambling companies including sports betting site DraftKings and Peter Chernin’s The Action Network.

It will also compete against Rupert Murdoch’s Fox, which is proving to be one of the most aggressive new players in US sports betting, heavily promoting its new Fox Bets service and holding a stake in fantasy sports company FanDuel owner Flutter. Sky, the UK media and telecoms company that Fox previously owned a stake in, is one of the few companies that has attempted to bridge the worlds of broadband and betting via Sky Bet.

At stake is a significant prize. The online sports betting market in the US will grow 17-fold from $494m in 2019 to $8.4bn by 2025, predicts Vixio GamblingCompliance, the industry research firm.

The shift into gambling is central to Verizon’s goal of turning Verizon Media Group into a growth unit, alongside a revival in digital advertising and a move into online commerce.

At the end of last year VMG also signed a global deal with Entain — owner of the bwin, Ladbrokes and Coral brands — to create a virtual reality gambling platform where fans can watch matches, check statistics and make bets.

The ties Verizon is cultivating with sports were hammered home at Apple’s iPhone launch in October when chief executive Hans Vestberg took to the stage alongside Tim Cook to unveil a 3D “super stadium” augmented reality app developed by VMG that linked sports betting to its 5G network.

James Kilsby, managing director of Vixio GamblingCompliance, said that Verizon’s NFL relationship, its 5G technology and its loyal band of millions of Yahoo Sports users mean that it “ticks a lot of boxes” as a potential big player in the fast-growing US sports betting market. He added that betting is now an “overriding[ly] mobile experience”, increasing the potential for media and telecoms groups to push into the sector.

Gowrappan joined Verizon at the same time as Vestberg took the helm as the telecoms company sought to reset its strategy.

Verizon’s media arm, previously known as Oath, had aimed to turn the struggling dotcom era brands AOL and Yahoo into a digital media and advertising powerhouse capable of winning market share from Facebook and Google.

But the plan backfired as Verizon refused to integrate its telecoms customer data with the new assets, against a backdrop of plummeting valuations for online media businesses as an anticipated digital advertising boom failed to materialise.

Verizon was forced to write off almost $5bn as a result. Thousands of jobs were cut and assets including Tumblr and The Huffington Post have been sold, the latter in exchange for a minority stake in BuzzFeed rather than any cash — and, according to its latest accounts, at a $119m loss.

Gowrappan said the business he inherited lacked focus and was weighed down by trying to do “a billion things”.

The unit, rechristened Verizon Media Group shortly after he arrived, has cut costs, integrated its disparate systems and set out a strategy to grow in betting and online commerce. It has also established paywalls for premium versions of its Yahoo Finance and TechCrunch titles.

Evidence this turnround is bearing fruit emerged in its most recent quarter, with the media business returning to revenue growth for the first time since 2017 in the last three months of 2020. It reported a 11.4 per cent year-on-year rise to $2.3bn.

That was driven by a 25 per cent increase in advertising revenue, a 187 per cent rise in online commerce revenue and double-digit increases in the number of daily users of its Yahoo Finance and News titles. “It is a very proud moment to say we are a growth company,” said Gowrappan.

Verizon, which counts Warren Buffett as a top-five shareholder after he spent $8.6bn last quarter increasing his stake, has focused on its 5G strategy since Vestberg, a former Ericsson chief executive, took over. 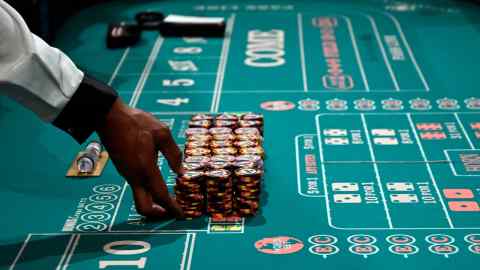 How committed the group is to its remaining media assets is unclear, given that it has explored selling off the entire media division in the past. With the company facing a 5G spectrum bill of $45.5bn, the slimmed-down media business, which accounts for only a tenth of Verizon’s overall revenue, is still regarded as a potential disposal candidate.

David Barden, an analyst with Bank of America, asked on a recent call between management and analysts whether the HuffPo sale was a sign that the media unit was being dismantled.

Vestberg indicated this was not the case: “We have put them in a position that we’re really happy with. So I’m looking for how these guys will execute.”

Gowrappan said Verizon would always be “judicious” with its assets but added that the restructuring process was finished and the business would aim to deliver on its growth plan. “Now we are playing offence,” he said.