Verizon – Why Verizon keeps promoting 5G at the Super Bowl

Verizon – Why Verizon keeps promoting 5G at the Super Bowl


Roughly one year into a pandemic that has almost completely annihilated major in-person gatherings  like the upcoming Super Bowl  Verizon is still talking up the potential of 5G in venues like football stadiums.


“Reimagining live events is one of the best use cases for the power of 5G,” said Diego Scotti, Verizon‘s CMO, in a release from the company.


It’s unclear whether Verizon will ultimately be successful in creating new businesses around its efforts. Regardless, you certainly have to give Verizon credit for its perseverance.


While COVID-19 has loudly ravaged business sectors ranging from travel to nightlife, a quieter casualty has been Verizon‘s wider 5G strategy. Before the pandemic started, the company had hoped to show off its super-fast 5G services during 2020 by installing them into high-traffic locations like downtown areas, sports stadiums and airports. After all, the diminutive propagation characteristics of signals in the millimeter wave (mmWave) spectrum that Verizon is using for 5G make such locations ideal for Verizon‘s displays.


But that strategy mostly got corona’ed, along with everything else.


And that’s why Verizon‘s Super Bowl efforts this year are particularly interesting. The Super Bowl has grown into a major network proving ground for wireless network operators. In past years, AT&T, T-Mobile and others have sought to use the Super Bowl as a way to show off their latest and greatest network technology and applications, given the bandwidth stresses that tens of thousands of selfie-snapping football fans can put onto stadium’s wireless networks.


Super Bowl LV in Tampa this weekend will be no different  but of course it will be completely different considering only 22,000 of a possible maximum of 65,000 fans will be allowed into Raymond James Stadium this year.


In its release, Verizon said it spent $80 million on Super Bowl-related network upgrades for this year’s game, including the installation of 70 miles of fiber, an upgraded distributed antenna system (DAS), and 281 small cell antennas around Tampa. “These permanent network enhancements will benefit Tampa residents and visitors for years to come,” Verizon noted.


Like most stadiums, Raymond James Stadium also offers a Wi-Fi network  which is often the first network all mobile customers will connect to regardless of whether their phone is 4G or 5G.


Importantly, Verizon has a wide-ranging 5G promotional agreement with the NFL, and the operator is touting that through the “Verizon 5G SuperStadium” capability inside the NFL’s mobile app. Football fans with an iphone-12 inside the stadium can use the app to view up to seven different camera angles of the Super Bowl game, while fans outside the stadium can view up to five different camera angles.


However, this capability is open to all NFL app users, not just Verizon customers. Further, no part of the service requires 5G: The video from each of the cameras is delivered to Verizon from the broadcasting system inside the Raymond James Stadium, and it’s distributed through Verizon Media to 4G, 5G, Wi-Fi and other connections.


A network for marketers


The truth is that Verizon‘s 5G efforts around the Super Bowl are promotional and not actually connecting or converting customers to 5G. Indeed, Verizon will be among the advertisers forking over the eye-watering fees required to broadcast commercials during the game, though the company has not yet released its Super Bowl ad.


In fact, it’s probably fair to say that the most innovative programs Verizon is hosting in conjunction with the Super Bowl sit squarely in the marketing department rather than the network-buildout department. For example, the company said it will offer a “5G Stadium” in the online video game Fortnite in conjunction with the Super Bowl, giving players the opportunity to “interact with their favorite NFL players and pro gamers in a way that’s never been done before.” 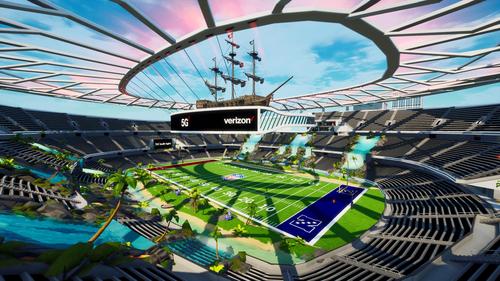 
“Highlighting the power of 5G for gaming, the virtual stadium was built utilizing the low lag and high speeds made possible by the Verizon 5G Ultra Wideband network,” the company said.


While 5G may have been used in the construction of a virtual stadium inside of a video game, it’s unlikely that the technology was necessary for the effort. But it does give Verizon another 5G talking point when it comes to the Super Bowl.


Right now, Verizon‘s 5G efforts need a marketing boost because there’s very little reason to switch from 4G. Verizon‘s speedy mmWave 5G network, running on its highband spectrum, covers less than 1% of the US population, yet its “5G Built Right” advertising campaign is nationwide. Verizon‘s lowband 5G network is available nationwide, yet it’s not much faster than the operator’s 4G network.


This situation may change as Verizon continues to upgrade its network and potentially add in spectrum like the C-band, but so far the topic is probably more important to advertisers than to Americans who are still mostly homebound amid the coronavirus pandemic.


Glimpses of the future


Given the current status of Verizon‘s 5G network, and the ongoing pandemic, it’s easy to dismiss the company’s Super Bowl announcements as complete marketing fluff. And though there does seem to be plenty of dross, there are some hints of actual advancements that could be made in the future.


Specifically, Verizon‘s Brian Mecum said that the operator is testing a few “stadium of the future” services at the Raymond James venue this year. For example, he said the combination of speedy 5G connections and edge computing can allow in-person Super Bowl attendees to check the length of the line at the bathroom or the food court before leaving their seat. He said other services could use facial recognition to quickly check on the identity of season ticket holders to allow them entry into the venue rather than forcing them to scan their tickets.


And he pointed to a lengthy Fintech Zoom article outlining Verizon‘s work with the N(BA)‘s Phoenix Suns on their new training facility. The facility uses 5G, edge computing and other technologies to monitor players’ performances, potentially identifying in real time when player Devin Booker’s right shoulder becomes dangerously fatigued, for example. According to the article, the technology has earned rave reviews from the Suns’ coaching staff.


“It’s not ready yet, but it is being tested,” Mecum explained. “It’s a view of what’s coming.”


This is all important in light of Verizon‘s overall corporate position. Unlike AT&T, Verizon has avoided entering other markets like video and media. And unlike T-Mobile, Verizon has so far refrained from cutting its prices and offering steep promotions to acquire large numbers of new customers.


Potentially as a result, Verizon gained far fewer new customers during the critical four quarter holiday shopping season when compared with AT&T and T-Mobile. That situation creates a quandary for Verizon‘s leadership as they look to derive new 5G revenues from a relatively static customer base. It’s unclear whether Verizon‘s “stadium of the future” services will ultimately contribute to that effort, but it certainly helps to explain why Verizon continues to focus on the topic at the Super Bowl amid COVID-19.