ROGERS — The pandemic stymied Walmart‘s typical shareholder events again this year but the retail giant managed to throw a last-minute celebration for its employees at an outdoor concert venue.

About 1,000 store workers, managers and others traveled to Walmart‘s AMP in Rogers for a morning of live music, food trucks and recognition from their executives for making it through one of the toughest years in the company’s history. Executives thanked employees for what they’ve done and what they continue to do.

Friday’s event was originally canceled for safety reasons, but as federal health guidelines softened and more people received the covid-19 vaccine, executives changed course with some employees being notified as early as last week about it.

Musical guests Black Pumas, Mickey Guyton and Walk the Moon entertained, but there were no celebrity appearances or emcee this year. Executives said they hope to have everyone back inside Bud Walton Arena next year.

Between performances, Walmart executives highlighted the company’s growth and achievements, including advancements in health and technology.

When the coronavirus pandemic struck last spring, store workers and managers alike had no playbook for what to do. Store attendance, supply chains and sales were disrupted and concerns arose about the profitability of Walmart and its competitors.

The company soon began following federal health guidelines and enforcing social-distancing policies, supplying masks and protective equipment to workers, among other efforts to curb the spread of the deadly virus. It also further developed its curbside pickup programs at Walmart and Sam’s Club stores to reach more customers safely.

John Furner, president and chief executive of Walmart‘s U.S. stores, said he believes the pandemic accelerated change in the company for the future. Along with groceries and everyday items, Walmart is investing in health care to differentiate itself from Amazon and Target.

“We can be a brand that simplifies people’s lives,” Furner said.

Instead of the usual crowd of 15,000 at Bud Walton Arena, composed of workers and shareholders from around the world, attendees from within a 120-mile radius of Walmart‘s headquarters drove to the AMP celebration. An upgrade from last year when all events were canceled. Walmart held its annual shareholders meeting virtually on Wednesday.

For fiscal 2021, Walmart generated revenue of $559 billion, solidifying its status as the largest U.S. retailer. It had a profit of $13.5 billion, down from $14.9 billion the year before.

Walmart‘s latest earnings report showed a surprising turnaround as people began shopping again in a return to a pre-pandemic lifestyle after a year of staying indoors and limiting contact with others.

The company had a profit of $2.73 billion in the quarter that ended in April, lower than $4 billion a year ago, but a far cry from the $2 billion loss it took over the winter holidays.

Looking ahead, Greg Penner, chairman of the board at Walmart, said the biggest challenge for the retailer is figuring out how to change and move faster while staying true to the company’s core values. He said sales were strong last year, but competitors also had strong results.

“If we’re not changing a lot, then we just won’t be able to satisfy our customers,” Penner said.

While celebrities didn’t physically make the event, many appeared in short video clips to offer their thanks to workers for their contributions in the past year. They included Drew Barrymore, Jay Leno, Simu Liu, Matthew McConaughey, Leslie Odom Jr., Sofia Vergara and Mark Wahlberg, among others.

Sir Elton John also made a virtual appearance to announce that his organization is working with Walmart to fight the AIDS epidemic. More details about their plans are expected in the coming weeks.

Judith McKenna, president and chief executive of Walmart‘s international operations, highlighted the retailer’s diversity and inclusion efforts. For instance, at FlipKart there is a full team of women who lead and run operations in Chennai, India. About 300 people are on payroll and work women-only shifts for safety reasons, she said.

Despite modern efforts to bolster the status of women in India, they have been and continue to be subjected to sexual violence and oppression in the country, according to a 2018 Thomson Reuters survey.

“Diversity is our strength, but inclusion is our superpower,” McKenna said.

Executives also recognized the impact of George Floyd’s death on Americans, including their workers.

Patrice Gibson, a Walmart store manager in Chatham, Ill., recalled the events of May 31, the weight of Floyd’s murder and how people reacted to it. Gibson, a black woman, said she supported protesting but was at a loss for what to do when looters and rioters damaged and set fire to her store.

“There was a feeling of helplessness,” she said. Customers would approach her asking if their prescriptions were ready. Workers cried, realizing that they would be without a job.

The store has since been razed and rebuilt and has played a role in vaccinating more than 5,000 people in the area.

“I am so blessed and grateful to work for this company,” Gibson said. 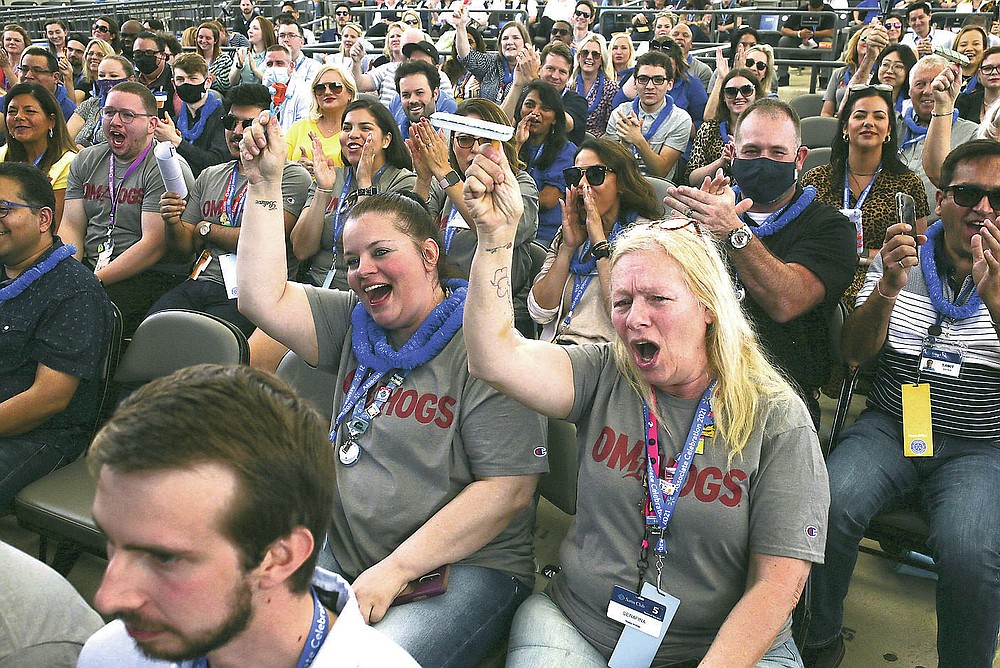