WISfans was originally deployed by famous clubs such as Real Madrid, Flamingo and FC Barcelona 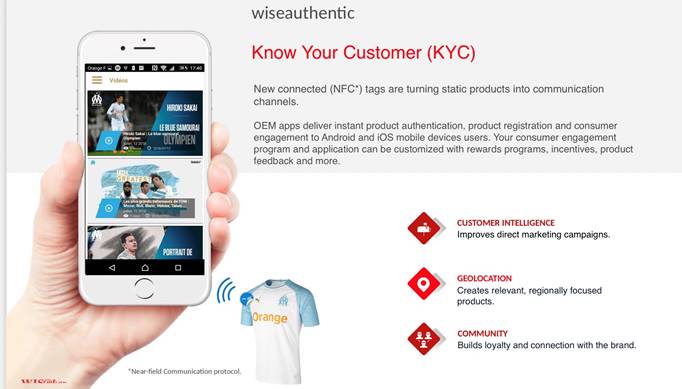 WISeKey International Holding Ltd (WIHN.SW), a Swiss based cybersecurity and IoT company, today announced that it is releasing its new WISfans platform combined with IoT technology based Near Field Communication (NFC) support to offer the sports industry a powerful tool to deter counterfeiting of branded merchandise, increase sales and enhance fan interaction.

In recent years, sport clubs have dedicated more time and resources toward establishing a direct relationship with their fans via secure mobile apps.  Sport Clubs and leagues are investing in creating a personalized fan experience while securing their data and connections using WISeKey IoT technologies which is allowing teams to better understand and better serve their fanbase.
Tapping into innovative digital technologies allows sports brands to be at the forefront of strengthening fan engagement on social media, inside stadiums, and fans watching any number of devices. We will cover a number of exciting ways in which technology is helping to improve fan engagement in sports.

According to Forbes, the 20 most valuable soccer teams in the world generated an average of $428 million in revenue during the 2016-2017 season (40% more than five years ago). Part of this revenue comes from the sale of branded merchandise. It is estimated that more than half of the world’s population, approximately 4.0 billion people, consider themselves to be soccer fans, making it the most popular sport in the world. While sales of branded merchandise for the sports industry continue to grow, counterfeiting has become a major issue for clubs and their fans.

WISeKeys’ WISfans and its NanoSealRT/VaultIC155 NFC tags/tokens are now fully integrated and provide sports clubs with a consistent robust way to protect their brands from counterfeiting, while reinforcing their interaction with fans. Specifically, WISfans helps sports clubs:

WISeKey (SIX Swiss Exchange: WIHN) is a leading global cybersecurity company currently deploying large scale digital identity ecosystems for people and objects using Blockchain, AI and IoT respecting the Human as the Fulcrum of the Internet. WISeKey Microprocessors Secures the pervasive computing shaping today’s Internet of Everything. WISeKey IoT has an install base of over 1.5 billion microchips in virtually all IoT sectors (connected cars, smart cities, drones, agricultural sensors, anti-counterfeiting, smart lighting, servers, computers, mobile phones, crypto tokens etc.).  WISeKey is uniquely positioned to be at the edge of IoT as our semiconductors produce a huge amount of Big Data that, when analyzed with Artificial Intelligence (AI), can help industrial applications to predict the failure of their equipment before it happens.

Our technology is Trusted by the OISTE/WISeKey’s Swiss based cryptographic Root of Trust (“RoT”) provides secure authentication and identification, in both physical and virtual environments, for the Internet of Things, Blockchain and Artificial Intelligence. The WISeKey RoT serves as a common trust anchor to ensure the integrity of online transactions among objects and between objects and people. For more information, visit www.wisekey.com.