Money & Markets Week Ahead for the week of January 24, 2021: Watch this IPO launch and a load of big earnings reports.

The cryptocurrency almost crested the $40,000 mark, but in just two days, a massive sell-off wiped more than $100 billion off the entire crypto market.

Looking ahead, it’s a big week for earnings as several large companies will unveil their quarterly numbers. Here’s what to look for in the week ahead on Wall Street:

Money & Markets Week Ahead: On the IPO Front

There are a few initial public offerings (IPO) on the schedule this week.

What is it? Shoals Technologies Group is headquartered in Portland, Tennessee — a small town located outside of Nashville.

EBOS products help carry electric current produced by solar panels to an inverter and then to a power grid.

In its prospectus, the company said it believed that “approximately 54% of the solar energy generation capacity installed in the U.S. during the 12 months ended Sept. 30, 2020, used at least one of our EBOS products.”

The IPO launches at a time when the new Biden administration has pledged to spend more on the nation’s renewable energy infrastructure.

The offering. The company plans to trade on the Nasdaq Global Market exchange under the ticker SHLS.

Renaissance Capital reported that Shoals Technologies is looking to raise $1 billion by offering 50 million shares at a price range of $19 to $21 per share.

Using the midpoint of that price range, the company could see a market value of around $3.4 billion.

Of the shares being offered, BlackRock and ClearBridge Investments are planning to buy $150 million and $125 million worth of shares, respectively.

Shoals wants to capitalize on what could be a huge boom for renewable energy.

The U.S. Energy Information Administration projects that the U.S. could consume more than 20 quadrillion British thermal units of renewable energy by 2050.

That would be close to double the amount consumed in 2020.

The company said it plans to use the proceeds of the IPO to repay outstanding debt.

The quarterly earnings season kicked off two weeks ago, but a lot of big names are reporting over the next five days, including:

So, instead of focusing on just one company, I want to look at the data surrounding the overall earnings season.

Quarterly guidance is up … According to market data specialists FactSet, the number of S&P 500 companies giving positive earnings guidance in the fourth quarter is up.

The data company said 56 companies have given positive earnings guidance in the quarter — the most since 2017.

The last time more than 50 companies gave positive guidance was in the first quarter of 2018.

FactSet said of the 56 companies providing that guidance, 29 of those were in the information technology and industrials sectors.

If the number holds, it will be the highest number of S&P 500 companies issuing positive earnings-per-share guidance since FactSet started tracking the data in 2006.

Earnings growth… As of a week ago, S&P 500 companies are expected to report an earnings decline of 6.8% for the fourth quarter.

Over the last five years, FactSet said actual earnings have exceeded estimates by 6.3%. During that time, 74% of S&P 500 companies have reported earnings per share above the mean EPS estimate on average.

In the last two quarters, 84% of S&P 500 companies have reported actual earnings per share above the mean estimate.

What does it mean? … Well, it may mean nothing.

But it could signify that more companies will continue to outperform earnings-per-share estimates in the fourth quarter.

The index reflects the change in house prices across the country. A high reading is a bullish signal for the U.S. dollar, while a lower reading is a bearish signal.

Home Prices Have Risen Since May 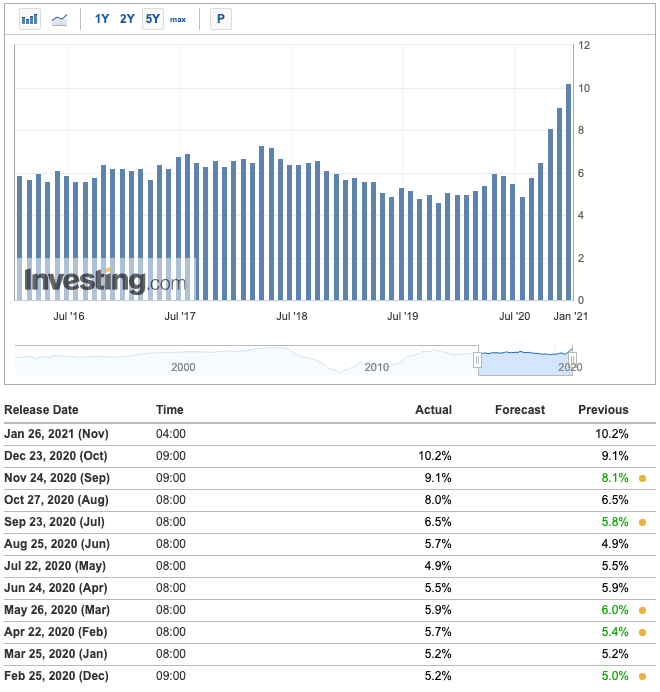 On Wednesday, the Federal Open Market Committee votes on where to set the Fed’s interest rate.

The interest rate is a key component in currency valuation. 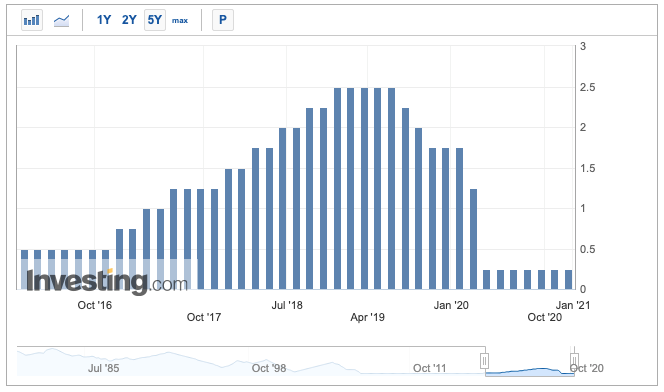 The committee has held interest rates at 0.25% since the outbreak of the COVID-19 back in March 2020.

The Commerce Department unveils real consumer spending for the fourth quarter on Thursday. 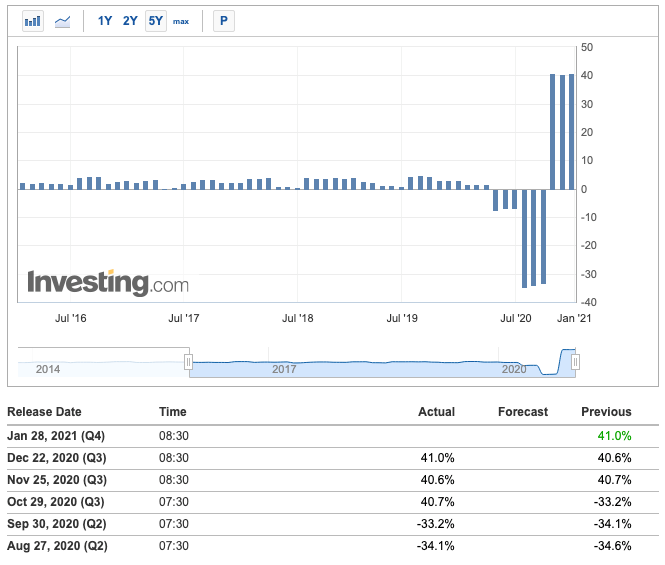 Real consumer spending has been up more than 40% in each of the last three months of 2020 following consecutive 30%+ declines.

An increase in consumer spending could spell higher short-term demand in the U.S. economy.

To finish off the Money & Markets Week Ahead, here’s a look at some of the key earnings reports due out next week:

That’s all for this week.

Matt Clark is the research analyst for Money & Markets. He’s the host of our podcast, The Bull & The Bear, as well as the Marijuana Market Update. Before joining the team, he spent 25 years as an investigative journalist and editor — covering everything from politics to business.