Spatial data company Matterport (NASDAQ: MTTR) officially completed its SPAC merger with Gores Holdings VI on Thursday and officially began trading on the Nasdaq on Friday, July 23. The deal netted Matterport $605 million to fund the growth of its already high-growth business and it values the company at about $4.2 billion at Thursday’s closing stock price.

The transaction brings to the public a company growing rapidly in a nascent and potentially massive spatial mapping market. If all goes well, this could be a critical infrastructure company in the digitization of real estate, and it’s one of my top growth stocks right now.

Matterport is a spatial data company. That basically means the company can collect data on any space using a specialized camera or even an iPhone or Android phone. A user simply takes a series of 360 images throughout a space and the company’s software maps it into what’s known as a “dollhouse,” an example of which you can see above. You can even build a dollhouse of your home for free on most smartphones right now, showing how ubiquitous the technology is.

The images and data captured have primarily been used for virtual tours of homes or Airbnb rentals or similar applications, but that’s just the start of where the company can add value.

With a digital recreation of a physical space, programmers can create a myriad of new data sets or tools. The number of doorknobs could be counted with a few clicks, square footage of a space can be measured, spatial data could be uploaded to a robot, and much more.

Right now, what we know is that Matterport is the leader in capturing spatial data around the world with over five million spaces already captured. But long term, the value will be in what users and developers do with the data.

What Matterport wants to be

This optionality for future applications with spatial data is what makes Matterport an exciting stock for investors. I had a chance to speak with Matterport CEO RJ Pittman recently and he shed some light on where he sees the company going in the future. Matterport is creating tools that Pittman hopes developers and partners will build upon, and here are some examples of where he sees the company’s spatial data being used.

These are just a few of the examples we discussed that are being commercialized today. The market is very young, but Matterport is seeing adoption grow with 330,000 subscribers in 150 countries. And as the user base grows, the incentive to develop value-added tools on the platform will grow. 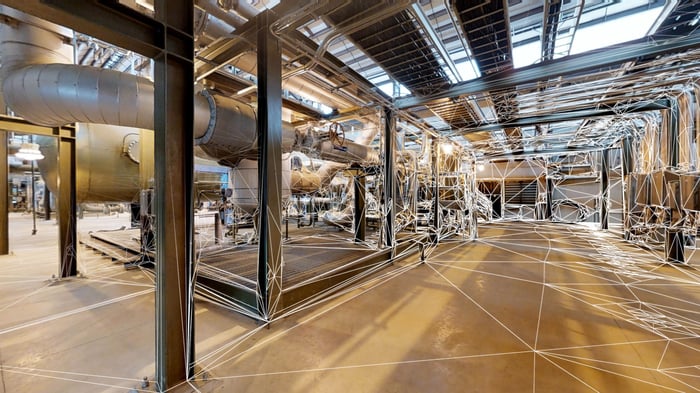 Matterport could be a household name

The tools we can visualize today are exciting, but that’s not the reason I think Matterport could be one of the next great growth stocks. The company’s true value will come out if developers use Matterport’s APIs to build tools for new products. This might be loading a Matterport capture of a home or office into a cleaning robot, it could be integrating a Matterport dollhouse into home remodeling or design, or it could be a developer building a platform for maintenance in a home using Matterport instead of in-person inspections and estimates. We don’t know what those tools will be yet, but if developers build valuable tools with the spatial data Matterport is capturing, that’s how the company ultimately wins. It may not be the end product, but it’ll be the enabling technology and data platform.

Here’s one way to think about this future. If five years from now it’s common for someone to say, “Just send me your Matterport,” the company will be a smashing success.

Matterport technology could solve a lot of real estate problems

There are a lot of “could be” and “if” statements when talking about Matterport, and that’s why the company is both exciting and risky. I think the company could be a household name five years from now, but it could also fail to find viable commercial markets that will drive profitability. And understanding that risk profile is key for investors.

What excites me is that I see Matterport answering a lot of difficult problems in real estate. Whether it’s something like helping Airbnb move from pictures of spaces to 360 walkthroughs, or residential real estate that’s allowing someone to virtually map and tour a home before ever stepping inside, or visualizing a commercial real estate buildout, the potential for Matterport technology is incredible. Plus, there is a myriad of potential opportunities no one has thought of yet.

The growth potential and optionality is too good to pass up for me right now. I own shares of Matterport, and will look to add more if the stock drops now that the company is officially public. With 108% revenue growth to $26.9 million in the first quarter of 2021 and nearly unlimited growth potential, this is a growth stock to hold for years to come.

10 stocks we like better than Matterport, Inc.
When our award-winning analyst team has a stock tip, it can pay to listen. After all, the newsletter they have run for over a decade, Fintech Zoom Stock Advisor, has tripled the market.*

They just revealed what they believe are the ten best stocks for investors to buy right now… and Matterport, Inc. wasn’t one of them! That’s right — they think these 10 stocks are even better buys.