It’s been an exciting couple of months for the Nasdaq Composite as the index has continued its relentless rally off its May lows, up 16% in barely 50 trading days. While the relentless bid under the market has been great for those fully invested in some of the best growth names, this rally has pushed valuations back to unreasonable levels over the short run, with quite a few stocks trading at more than 45x sales. This has made it quite difficult to find stocks available for new purchases, with investors taking on heightened risk by starting new positions at current levels. Fortunately, while most of the market remains expensive, there are a few names still trading at reasonable valuations that have either been out of favor short-term or out of favor for most of 2021. In this update, we’ll look at two of these names below: 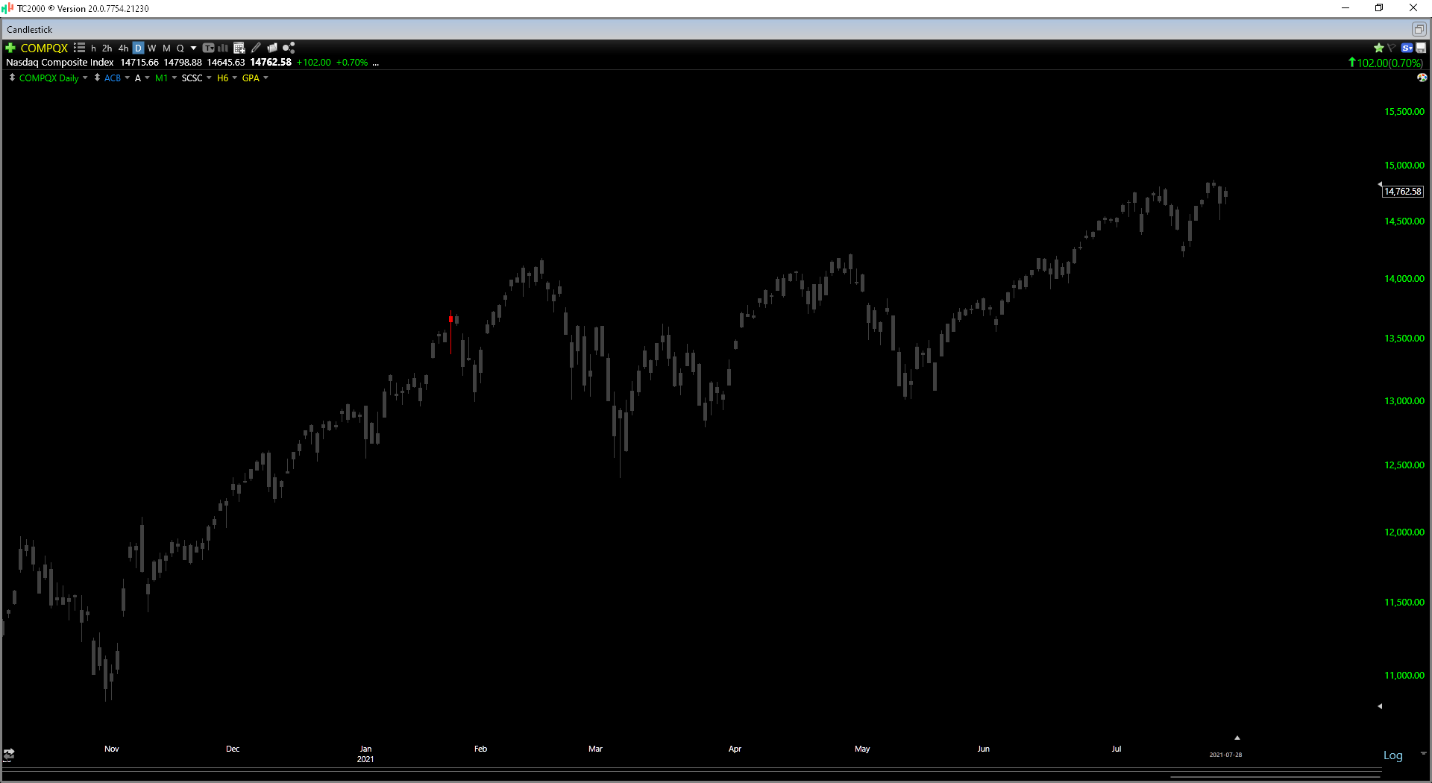 Zoom Video (ZM) and Activision Blizzard (ATVI) have little in common, hailing from two completely different industries (Enterprise Software & Gaming), but both do have one thing in common, they are out of favor currently relative to most of their peers. This is despite both companies having very impressive earnings growth rates, with ZM on track to report 46% this year ($4.88 vs. $3.34) and ATVI enjoying high double-digit growth rates the next two years. While many investors might overlook ZM due to a trailing PE ratio above 100, it’s important to note that this earnings multiple is not that unusual when it comes to the top-25 ranked growth stories in the US Market, which typically command a multiple close to 100. Given that ZM should grow annual EPS by 72% this year based on estimates, I would argue that an earnings multiple of 80 is more than fair, especially after acquiring a cloud contact center juggernaut, Five9 (FIVN). Let’s take a closer look below:

As announced earlier this month, Zoom Video has acquired Five9 in an all-stock deal valued at nearly $15BB, picking up the leader in the cloud contact center space, adding significantly to its TAM. Notably, FIVN also has a very impressive net dollar expansion rate above 120%, comes with nearly 800 upmarket/enterprise customers, and brings trailing-twelve-month revenue of nearly $500MM, with an impressive revenue growth rate just shy of 40%. The Five9 acquisition should offer significant cross-selling opportunities, but we have seen annual EPS estimates reeled in for FY2023 due to the acquisition, given that it’s an all-stock deal. 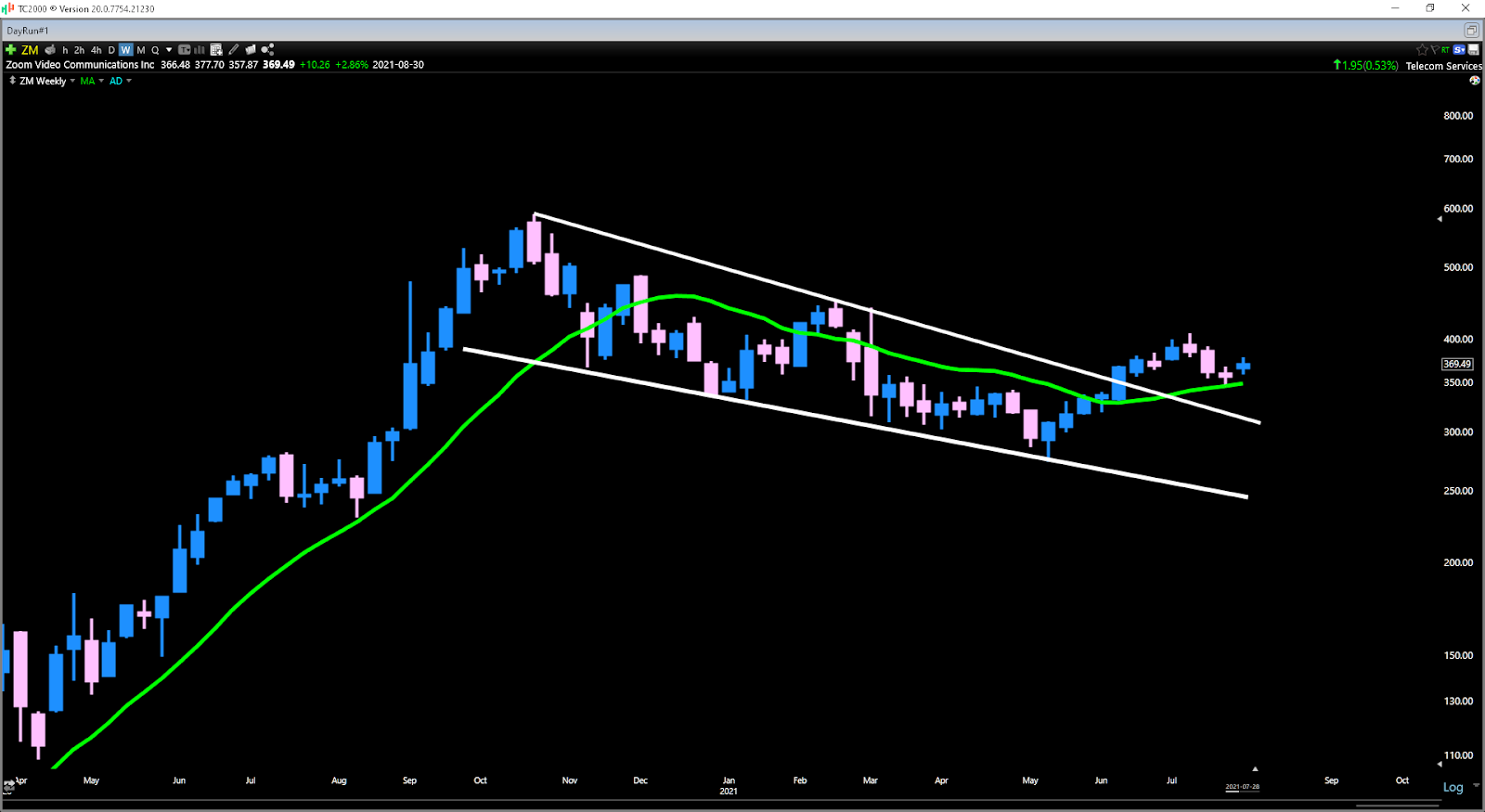 In summary, while ZM is an incredible growth story, I don’t see a low-risk buy point shaping up just yet, but one could arrive if we do see a re-test of the company’s lows in the $340.00 – $350.00 area. For now, I remain long from $330.00, and would consider adding to my position at $345.00 or lower. Ultimately, the sky is the limit with two massive growth stories with secular tailwinds now under the same roof, and I believe FY2023 estimates of $5.28 will end up being on the conservative side.

The next stock worth keeping a close eye on is Activision Blizzard (ATVI), the leader in the gaming industry with titles that included Overwatch, World of Warcraft, Call of Duty, and StarCraft.  The company had a solid Q1 2021 report with revenue of $2.28BB, up 27% year-over-year, with quarterly EPS soaring to $0.98, a new record. Unfortunately, the exceptional results were overshadowed by accusations of sexual assault and harassment, with protesters calling for the firing of the Activision Blizzard CEO, Bobby Kotick. California’s Department of Fair Employment & sued Activision, with women subject to unequal pay and retaliation. This led to a walkout earlier this week, while fans have called for boycotting the leading video game publisher.

While the accusations are terrible, the time to buy stocks is when they are significantly out of favor, and with ATVI being one of the top names receiving negative press, sentiment is sitting near multi-month lows. However, under the hood, ATVI has had an impressive compound annual EPS growth rate of ~14.5% since FY2014, with 17% growth expected in FY2021 and 24% growth expected in FY2025. This impressive earnings trend with accelerating growth makes the stock quite attractive if we ignore the accusations and look strictly at the business, with stocks sporting these growth rates and margins rarely dipping below 25x forward earnings. Obviously, ATVI could miss earnings and see some short-term and medium-term pressure due to the recent accusations, but even assuming a miss on FY2022 estimates, the stock is still sitting at barely 18x forward earnings.

As shown in the chart above, Activision has pulled back sharply due to soured sentiment on the stock, but ATVI has dropped down to a multi-year breakout level at $82.00 and still remains in a long-term uptrend, with its long-term moving averages coming in near $80.00. Combined with ATVI trading at a very reasonable valuation of just ~18x FY2022 earnings estimates, this looks to be setting up a buying opportunity if this weakness continues. Based on what I believe to be a conservative earnings multiple of 24, I see a fair value for the stock of $111.60, translating to nearly 35% upside from current levels. If ATVI were to dip to $79.70, where the upside would increase to 40%, I would view this as a low-risk area to start a position in the stock.

While several Nasdaq names remain expensive after incredible runs over the past 16 months, some names continue to look compelling, with ZM and ATVI being two interesting names as they’ve recently underperformed their peers. While ZM would require a dip below $350.00 to head into a low-risk buy zone, ATVI is getting quite close to a low-risk buy zone and could get there in August if we continue to see negative sentiment around the stock. So, if we see some general market weakness in what’s typically a seasonally weaker period of the year, I believe ZM and ATVI are two names to keep near the top of one’s shopping list.

Disclosure: I am long ZM

Disclaimer: Taylor Dart is not a Registered Investment Advisor or Financial Planner. This writing is for informational purposes only. It does not constitute an offer to sell, a solicitation to buy, or a recommendation regarding any securities transaction. The information contained in this writing should not be construed as financial or investment advice on any subject matter. Taylor Dart expressly disclaims all liability in respect to actions taken based on any or all of the information on this writing.

About the Author: Taylor Dart

Taylor has over a decade of investing experience, with a special focus on the precious metals sector. In addition to working with ETFDailyNews, he is a prominent writer on Seeking Alpha. Learn more about Taylor’s background, along with links to his most recent articles. More…

More Resources for the Stocks in this Article