Though the week began on a soft note, it’s only natural to see a bit of a selloff after the record highs logged lately. It was also encouraging that the market bounced off its lows late yesterday. It was a pretty impressive comeback.

Today could be a bit of a waiting game with everyone on the edge of their seat ahead of the Fed minutes early this afternoon. The major indices didn’t show much direction overnight, and Europe and Asian markets are mixed.

Crude is still getting a close look after OPEC+ failed to reach an output agreement. It’s up slightly this morning after cratering yesterday. The dollar is up vs. the euro. Volatility leveled off a bit after yesterday’s jump, and the 10-year Treasury yield fell below 1.35% for the first time since February.

The bond market is clearly telling us something. One thing it could be saying is that inflationary pressure is off. Another thing it could be hinting at is a possible slowdown in the economy. You wonder if it’s a cautionary tale, so to speak, so keep an eye on it over the next few days. The key today will be to see if yields can get back and close above 1.35%. A key technical support area below that could be 1.2%.

When you think about it, it’s pretty incredible to be talking about these yields. It was only a few months ago that the 10-year was topping 1.75%, with 2% in the sightlines. Perhaps the move down in yields is a reflection of policy expectations. And speaking of those, we’ll get another glimpse at the Fed’s thinking this afternoon.

Do You Have A Minute(s)?

Now that we’re officially back from the holiday (well, most of us are), the big event today could be Fed minutes from its last meeting, due at 2 p.m ET. Obviously, the Fed didn’t have Friday’s blowout jobs data on hand when it met in June, but it did throw a bit of a curveball that month when it talked about possibly getting more hawkish. The minutes could give us more of a behind-the-scenes look at what Fed officials discussed.

Things to watch include what factors the Fed is worried about specifically on the inflation front. Is it the rising cost of many commodities? Businesses having trouble finding employees due to wage pressure? Consumers being less eager to spend on certain items? Or some sort of combination?

Timing is another consideration. How soon do Fed officials think they need to start pulling back on stimulus, and which bond buying are they likely to cut first? A lot of talk has centered around the Fed’s mortgage bond buying, which currently runs at around $40 billion a month.

One option suggested at the last meeting was to start scaling back the mortgage-bond purchases earlier or more quickly than the Fed’s Treasury debt purchases, The Wall Street Journal reported. “There are some unintended consequences and side effects of these purchases that we are seeing play out,” Dallas Fed President Robert Kaplan told the newspaper, referring to the mortgage-bond purchases, which he thinks are contributing to skyrocketing home prices.

A wall of worry welcomed everyone back from their holiday, though how high a wall it was depended on what part of the market you were in.

Fixed income was where a lot of this new caution showed up, as the 10-year Treasury yield sank to a four-month low of 1.35% by the end of the day Tuesday. The lower yield helped hammer the Energy and Financial sectors. Both of those tend to do better when people expect an improving economy.

Caution could reflect concerns about the market’s historically high valuations and the Delta variant of Covid. There’s also worry that rising crude prices could slice into economic growth.

Speaking of which, the Energy sector got a double-whammy yesterday from yields and crude prices, which dove after OPEC+ failed to reach a production deal. While some talking heads on the financial networks think this spat among oil producers could result in crude prices zooming higher (and it did for a little bit there early yesterday), there’s also talk that if OPEC+ is in disarray, that’s not necessarily bullish for crude (see more below).

If you had a brother or sister growing up, you might remember fighting over a toy until your mom got fed up and took it away. That’s how AMZN and especially (MSFT) might feel right now. After feuding for years about who should be rewarded the government’s $10 billion Joint Enterprise Defense Infrastructure, or “JEDI,” cloud contract, neither is going to get it. The government announced Tuesday it’s being canceled. That was after it originally rewarded the work to (MSFT), something AMZN protested.

Strangely enough, (MSFT) didn’t get hit too hard by the news, at least not immediately on Tuesday. One reason could be that the government apparently still needs this capability, and may ask for new proposals, CNBC reported. JEDI was meant to modernize the Pentagon’s IT operations over 10 years. It’s hard to believe that need has gone away. Even some other cloud companies might have a shot at some of the work, analysts said. Stay tuned.

Other stocks that started the week on the wrong foot included airlines, which may be getting hurt by worries about the Delta variant. That clashes with the latest government travel statistics, however, which show U.S. passenger traffic at airports improving to above 2019 levels on a couple of days earlier this month.

TD Ameritrade’s Investor Movement Index® (IMXSM)increased to 9.08 in June, up from its May score of 8.32. The IMX is TD Ameritrade’s proprietary, behavior-based index, aggregating Main Street investor positions and activity to measure what investors actually were doing and how they were positioned in the markets.

The S&P 500 Index (SPX) and Nasdaq (COMP: GIDS) chalked up record highs amid generally positive economic data and cooling inflation fears last month, helping drive the IMX to a new peak in June. We’re heading into what is usually the summer lull, with relatively light trading volumes and low volatility, but corporate earnings loom large in July. The guidance from big names, starting with Financials, could be a focal point, and depending on what is said, the markets as a whole are likely to move based on their outlooks for the rest of the year.

Apple (NASDAQ: AAPL) and (MSFT) were other stocks the IMX showed being popular in June. While it’s not certain, the fact that those two “mega-caps” were going up during a lot of the month might have given some investors more confidence in the overall market. It’ll be interesting to see if volatility comes back, and if that starts to change people’s opinions and exposure to the market.

Volatility did start punching a bit harder Tuesday as the Cboe Volatility Index (VIX) reached nearly 16.5 after falling late last week to post-pandemic lows below 15. Still, 16.5 isn’t the type of figure that’s likely to strike fear into many hearts. Some of the strength in VIX early this week could simply reflect investor caution ahead of today’s Fed minutes. If the minutes look relatively benign, it’s possible volatility could ease into the weekend. 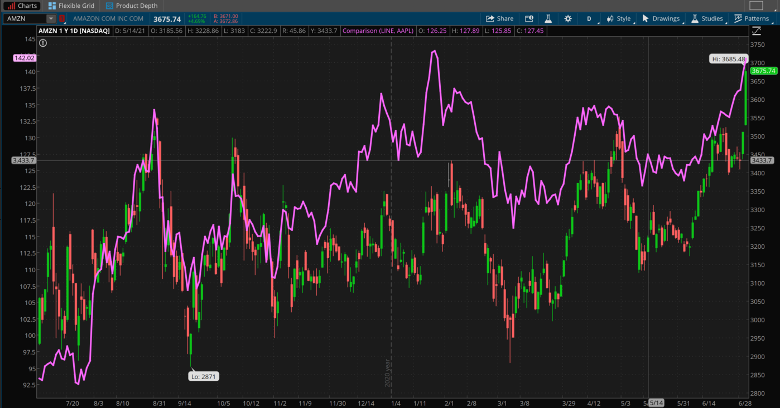 CHART OF THE DAY: 10 MONTHS AFTER. You have to go all the way back to last September to find the last time Amazon (AMZN—candlestick) shares hit a new all-time high. That string got broken yesterday, and fellow FAANG member Apple (AAPL—purple line) is also near all-time highs. It last set one in January. It’s possible that the recent strength of AAPL, AMZN and Microsoft (NASDAQ: (MSFT)) might be helping draw some investors back into stocks as their confidence grows. Data Source: Nasdaq. Chart source: The thinkorswim® platform. For illustrative purposes only. Past performance does not guarantee future results.

The ironic thing is that this jump in “stay at homes” came after a month that saw many of these same stocks appear to grow a little less popular (see more below). It will be interesting to watch ZM and PTON here and see if they get met with resistance as more companies call people back to work, as we saw with the big Financial firms this week. We’re in a transition state in many peoples’ lives and the market in terms of the stay-at-home trade.

An OPEC History Lesson… With OPEC+ back in feuding mode, a lot of talk in the financial media yesterday focused on possible $80 or even $100 a barrel crude, even as the actual price came under pressure. Maybe the market knows something the media doesn’t. While you certainly can’t rule out another big upward swing in crude prices, you could also argue (based on history) that when OPEC battles, the biggest users of crude tend to win the war. One example was in 1986, when crude prices plunged from around $30 a barrel to $12 a barrel after Saudi Arabia and some of its neighbors in the Persian Gulf tried to increase their share of the crude market by increasing production without cooperation from the rest of OPEC. Another time, more recently, crude prices collapsed in 2014 because OPEC couldn’t come to an agreement on how to respond to growing U.S. crude production and ended up flooding the market.

…May Provide Clues Of What’s Next For Crude: There’s no guarantee that without an agreement anyone in OPEC will “go rogue” and turn up the taps on their own. But you can’t rule it out, because OPEC members have a history of defying quotas even when the organization sets them. Right now, the United Arab Emirates (UAE) looks like one to keep an eye on, since they apparently want to be able to pump more but apparently were turned down by Saudi Arabia and Russia, according to media reports. It should be very interesting to see what happens next, because if OPEC+ really walks away with no agreement to raise production from current low levels instituted under Covid conditions, the temptation to break those quotas with crude at such a high level could be tough for member countries.

Image by efes from Pixabay

The preceding article is from one of our external contributors.
It does not represent the opinion of Fintech Zoom and has not been edited.

AMD Stock – Coinbase Is Down 31% Since IPO: 2 Best Crypto-Related Stocks to Buy Now

AMD Stock - Coinbase Is Down 31% Since IPO: 2 Best Crypto-Related Stocks to Buy Now