The Delta variant is now present in over 90 countries and has become the most prevalent variant among new COVID-19 cases in the United States, according to California-based genomics company Helix.

So far, however, it is hard to tell how much the new strain will disrupt the global growth rebound that has helped power risk assets higher in recent months.

Here are some assets where concerns over the Delta variant may be moving the needle. 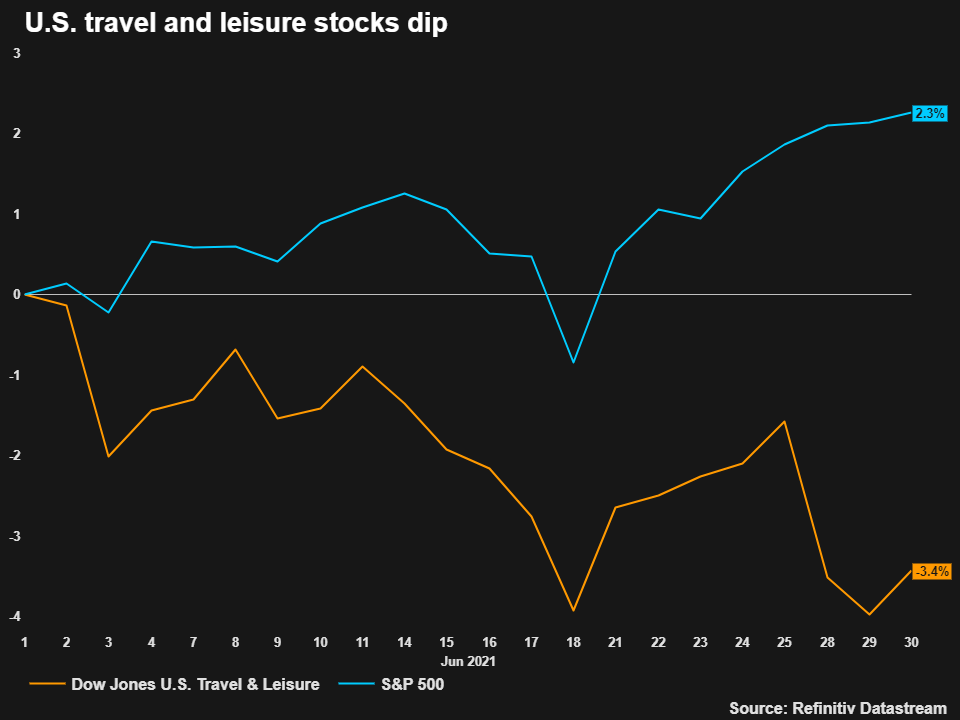 Southwest Airlines, American Airlines, Delta and Carnival Corp made the list of the 25 worst performing stocks over the last 1 month, a Reuters analysis showed. The Dow Jones U.S. Travel & Leisure Index fell 3.35% in June, compared with a 2.2% gain for the S&P 500 Index.

Oil prices, which were hammered in the wake of the pandemic, rose about 10% in June, however. 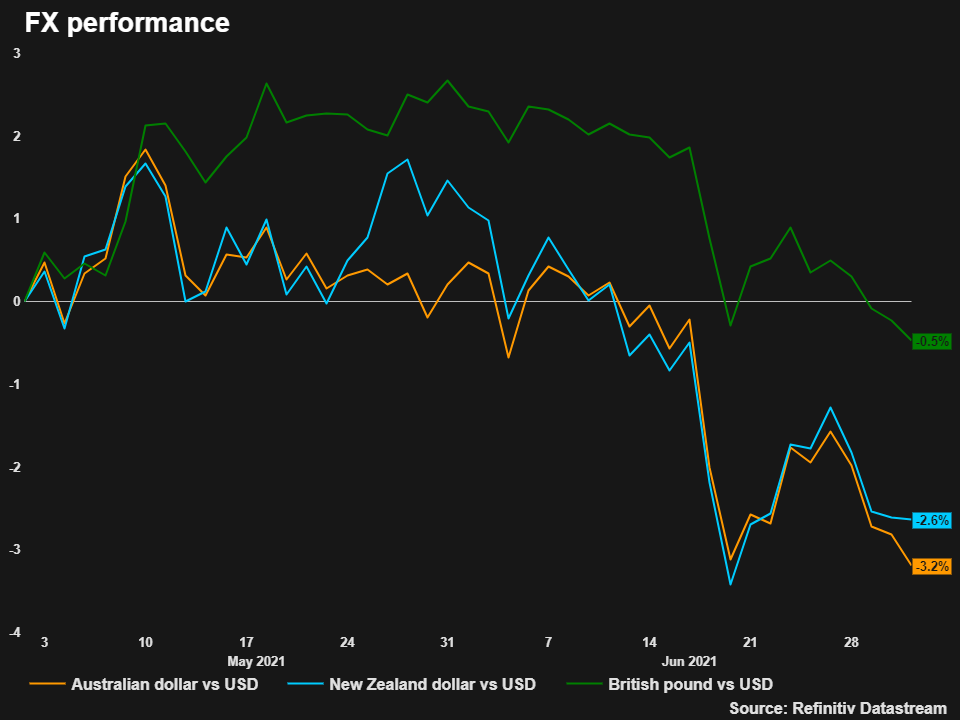 Worries over the Delta variant are weighing on the currencies of countries where it is spreading quickly, including the Australian dollar and British pound.

The moves have contributed to a rally in the U.S. dollar that was sparked by the Federal Reserve’s hawkish shift and saw the U.S. currency gain 2.7% against a basket of peers in June.

“Early on I think the risks of the Delta variant were most apparent in British pound,” said John Doyle, vice president of dealing and trading at FX payments firm Tempus Inc.

“Now I think it is most apparent in the Oceanic currencies that are generally tied to Asian risk sentiment.”

Some investors have piled into Treasuries in recent weeks, fueled by expectations that U.S. growth may be peaking and the Fed will be less tolerant of rising consumer prices. Some investors believe fresh uncertainty over Covid-19 may be accelerating the move in yields on U.S. government bonds, which are among the world’s most popular haven assets.

“The fear that incremental lockdowns could reappear has recently been a factor” in Treasury positioning, wrote Arnim Holzer, strategist with EAB Investment Group, in a note on Wednesday.

“Multi-asset and safety seeking does look to be gaining a bit of interest with U.S. Treasury and dollar strength,” Holzer said.

So-called value stocks – companies that trade at low multiples to book value and tend to be more sensitive to economic cycles – ripped higher earlier this year on expectations of an economic rebound but have stumbled lately.

Meanwhile, shares of growth names, including stay-at-home bets like Amazon.com, Netflix, and Zoom Video Communications and ETSY Inc, have risen.

JP Morgan’s Marko Kolanovic believes the shift resembles one that took place in February, when investors briefly grew defensive on worries over the Alpha variant, only to sell bonds and pile back into value stocks when the threat had passed.

“We expect this to repeat now as investors assess the so-called Delta variant,” Kolanovic said.