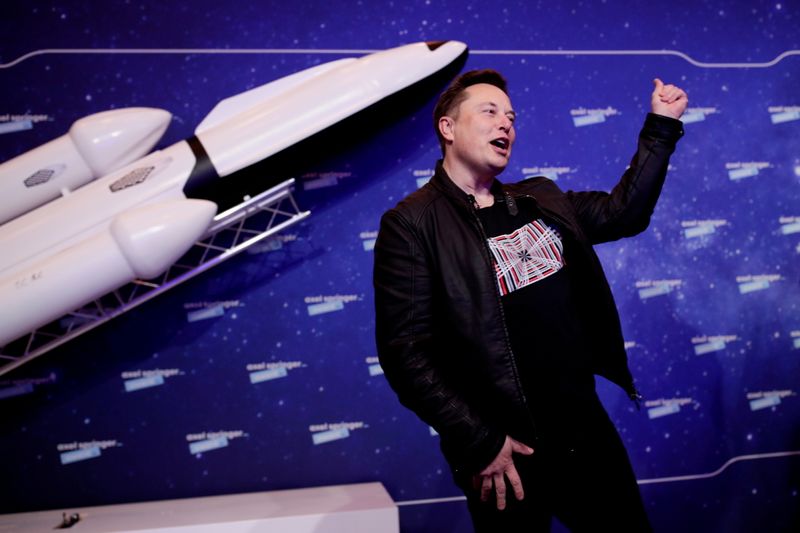 By Hyunjoo Jin and Supantha Mukherjee

Starlink, which cost him C$600 dollars (US$486) for hardware and a lofty C$150 monthly subscription, provides “blindingly fast” speeds when uploading videos or streaming movies, he said.

But the beta test customer said he experiences dropouts during calls on Microsoft Teams and Zoom.

“If you’re in the city and you have alternatives, I wouldn’t recommend it. But if you’re in the country, like in the middle of nowhere and you’re getting pathetic internet service, then it’s definitely a competitor.”

For billionaire entrepreneur Elon Musk – founder of electric vehicle manufacturer Tesla (NASDAQ:) Inc – the success of one of his biggest bets may come down to just how many people like Joyce are out there.

Speaking at the Mobile World Congress event, Musk on Tuesday discussed progress in Starlink technology and subscriber growth as he forecast total investment costs in the satellite internet business at as much as $30 billion.

If the service is successful, it could vastly expand the reach of broadband internet around the world, connect Tesla vehicles, and even provide a new platform for traders and others with exotic internet needs, people familiar with the Starlink plan said.

But to do that, it must avoid the fate of similar satellite ventures that have preceded it.

“Not bankrupt, that would be a big step,” Musk said last year. “That’s our goal.”

SpaceX’s Starlink division launched its “Better Than Nothing Beta program” in the United States last October, with data speeds up to a competitive 150 megabits per second. Early reviews are mixed, with some users complaining of the problems that have always plagued satellite internet: sensitivity to weather.

“I’m gonna have to spray it with a garden hose to reboot my internet. … That just feels so wrong,” a Reddit user who said he lives in Arizona posted earlier this month, along with an error message saying “Offline: Thermal shutdown” and “Starlink will reconnect after cooling down”.

SpaceX President Gwynne Shotwell in April said the firm has “a lot of work to do to make the network reliable”. The company on Tuesday did not have an immediate comment.

Service should improve with more satellites and other improvements: Starlink has launched over 1,700 of its 260 kilogram satellites so far, and envisions more than 40,000.

The economics are daunting nonetheless. Musk has said Starlink could serve less than 5% of internet users and still generate $30 billion a year in revenue. Critics called that wishful thinking.

“Is the demand there for tens of millions of subscribers at that price point?” asked analyst Tim Farrar, president at TMF Associates. “In most parts of the world, if you said to someone, your broadband service will cost you 100 U.S. dollars a month, they’d be like, incredulous.”

He said there might be wealthy people in isolated areas, “but there’s just not very many of those people”.

He said Starlink would also struggle for enough capacity to support that level of demand, especially as people are consuming more data for video streaming. That would mean “significant additional expenditure on upgrading the satellites and adding more satellites.”

Pricing pain could be eased by nearly $900 million in Federal Communications Commission subsidies earmarked for Starlink for bringing the internet to rural areas.

Perhaps more importantly, Starlink said it can drive costs down by building its own terminals and satellites. It has hired engineers from chipmakers Broadcom (NASDAQ:) Inc, Qualcomm (NASDAQ:) Inc and others to design its own communications chips, a person familiar with the matter said – an approach similar to that taken by Tesla.

Starlink has more than halved the terminal cost from $3,000 and expects it to be in a range of a few hundred dollars within the next year or two, Shotwell said in April.

“Lowering Starlink terminal cost, which may sound rather pedestrian, is actually our most difficult technical challenge,” Musk tweeted last year.

“When you own pieces of the stack, you can do really technically sophisticated things at an affordable cost,” said Misha Leybovich, a former Starlink sales director.

Still, competition promises to be fierce. Amazon.com Inc (NASDAQ:) subsidiary Kuiper has a directly competing project, while OneWeb – a collapsed satellite operator rescued by the British government and India’s Bharti Group – has vowed to be in the game as well.

Ahead of Musk’s speech at the Mobile World Congress, OneWeb said on Tuesday that it has secured an additional $500 million investment from Bharti, bringing its total funding to $2.4 billion.

SpaceX, Amazon and a number of others have “created quite a race that no one is absolutely sure whether there is a big enough market for it,” Iridium Chief Executive Matthew J. Desch told Reuters.

Zoom – The Zoom Revolution Empowers Women to Speak Up

Zoom - The Zoom Revolution Empowers Women to Speak Up