When you are trying to decide where to invest your money, it’s important to consider a stock’s current valuation. Otherwise, you could be limiting your possible returns, and face the risk that the price could substantially drop if it’s trading at too high a premium. On Robinhood, a zero-commission trading platform that’s popular with many young investors, there are several hot stocks on its Top 100 list today that are grossly overpriced.

Three companies that are good investments (but not at their current valuations) are HEXO (NYSE:HEXO), PayPal (NASDAQ:PYPL), and Tesla ((NASDAQ:(TSLA))). While there may be a good reason to invest in their businesses, their share prices today are just too high. Both Tesla and HEXO have doubled in just the past three months. And that’s why you should consider holding off on buying them — at least until things settle down and their valuations come down to more reasonable levels, perhaps after the next market crash.

HEXO’s shares have taken off in 2021. The pot stock is already up more than 70% and soundly outperforming the S&P 500, which is practically flat over the same few weeks. The company announced earlier this month that Truss, its joint venture with Molson Coors, would be launching hemp-derived cannabidiol (CBD) beverages under the brand Veryvell in Colorado. Fresh off the heels of the U.S. election in November and news that four more states would be legalizing recreational marijuana, it’s easy to see why investors may have gotten overly bullish on HEXO.

But it hasn’t all been good news for the company. This month, the Ontario Cannabis Store announced that it was issuing a voluntary recall on three of HEXO’s disposable vape pens.

And there are still questions about how much the company will grow. The company last released its quarterly earnings on Dec. 14, 2020, and sales of 29.4 million Canadian dollars for the period ending Oct. 31, 2020, were only up 8.7% from the previous period. Beverage sales of CA$3.1 million grew 53.7% quarter over quarter, but they were still just a fraction (10.4%) of the company’s top line. While investors are optimistic about beverage sales, it may not be enough to justify HEXO’s current price tag. When comparing its price-to-sales (P/S) multiple to that of its Canadian peers, HEXO comes out higher than Aurora Cannabis, Aphria, and OrganiGram: 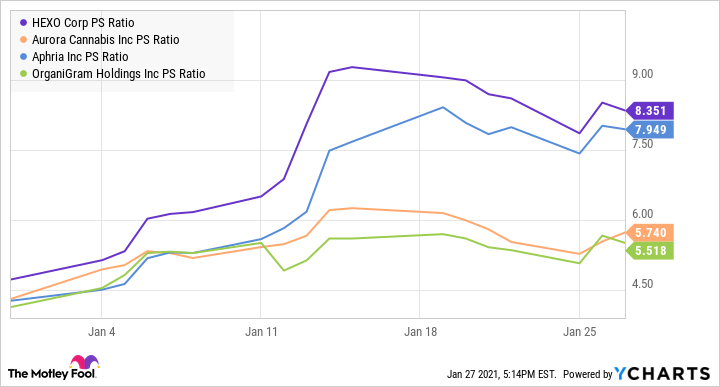 Without a sizable correction in share price, Robinhood investors should steer clear of HEXO for now. The stock’s rapid ascent in recent months has made it too expensive of a buy, especially given its lackluster sales numbers.

In the past year, shares of PayPal have nearly doubled while the S&P 500 is up by just 13%. Currently, investors are paying a price-to-earnings (P/E) multiple of more than 80 to buy shares of PayPal. On the Technology Select Sector SPDR Fund, the average stock is at a P/E of just 35. Even the stock’s forward P/E of more than 50 is still a steep price for a business that over the last three quarters generated sales growth of just 19.7%.

Normally, investors can ignore a high P/E if there are at least some strong sales numbers behind the growth. And while PayPal is growing at a decent rate, it’s not nearly high enough to justify such an enormous price tag. If there’s a market crash and its stock comes down, PayPal could be a hot buy for Robinhood investors, especially with the economy potentially moving away from cash amid the pandemic and increasingly toward digital transactions. According to a report from MarketsandMarkets last year, the digital payment market could be worth $154.1 billion by 2025, growing at a compound annual rate of 14.2% until then.

Investing in PayPal would be an excellent way to tap into that growth. In October, the company also announced it would allow its users to buy and sell bitcoin and other cryptocurrencies, opening up the door to even more growth. But until its share price comes down significantly, this isn’t a stock that’s worth buying right now.

Tesla‘s stock has been soaring over the past year, climbing nearly 600%. Pandemic or not, consumers continue to purchase the company’s vehicles. And that’s led to more bullishness from investors. It also didn’t hurt that after posting five straight profits, the stock made its way onto the S&P 500 last month.

There’s even more excitement surrounding the stock now that President Biden has taken office, as he is an advocate for cleaner energy. In January, Biden announced that the federal government would replace its entire fleet of vehicles with electric ones.

That, coupled with Tesla‘s strong results, has made the stock a scorching-hot buy. On Wednesday, the company released its fourth-quarter results for the period ending Dec. 31, 2020, where revenue of $10.74 billion came in ahead of analyst expectations of $10.4 billion. And although its adjusted earnings per share of $0.80 fell short of the $1.03 that Wall Street was expecting, the company stayed in the black for the sixth consecutive period.

But as good as those results are, the stock is just too expensive given the company’s relatively light profits. Over the past four quarters, Tesla has reported net income of $721 million on sales of $31.5 billion — for a profit margin of just 2.3%.

Coming into earnings, shares of Tesla were trading at a mammoth P/E of more than 1,600. And while its profits were $165 million higher than they were a year ago, the bottom line still needs to get a whole lot stronger before this stock is a good buy for its money. For now, investors are better off waiting on the sidelines for a big drop in price before buying shares of the popular automaker.