In a new report published on March 30, Chainalysis details how Bitcoin spending trends in three areas — merchant services, gambling and darknet marketplaces — have changed, or even reversed. Pandemic Is Changing BTC Usage in ‘Unexpected Ways’

Weakening correlation could be a boon for Bitcoin merchant services, says report

Chainalysis reported that one such change in trend shows resilience among Bitcoin merchant services in the current economic crisis.

For example, the firm’s data for Bitcoin spending using merchant services from July 2019 until March 9, 2020 reveals that there was a strong positive correlation between price and expenditure: the more Bitcoin is worth, the more likely holders are to spend it.

Since the COVID-19 outbreak, this positive correlation has weakened by roughly half, and the total value of expenditure has declined.

While this indicates that Bitcoin holders are indeed spending less during Bitcoin’s recent decline in value, this decrease is less dramatic than might otherwise have been expected. This is because since the outbreak, the strength of the correlation between price and behavior has itself also weakened.

So while Bitcoin’s decline in price does continue to lead to reduced spending — it does not do so as significantly as it would have done in pre-pandemic times. A weakened correlation means that the price does is not dictating consumer behavior as strongly as before. 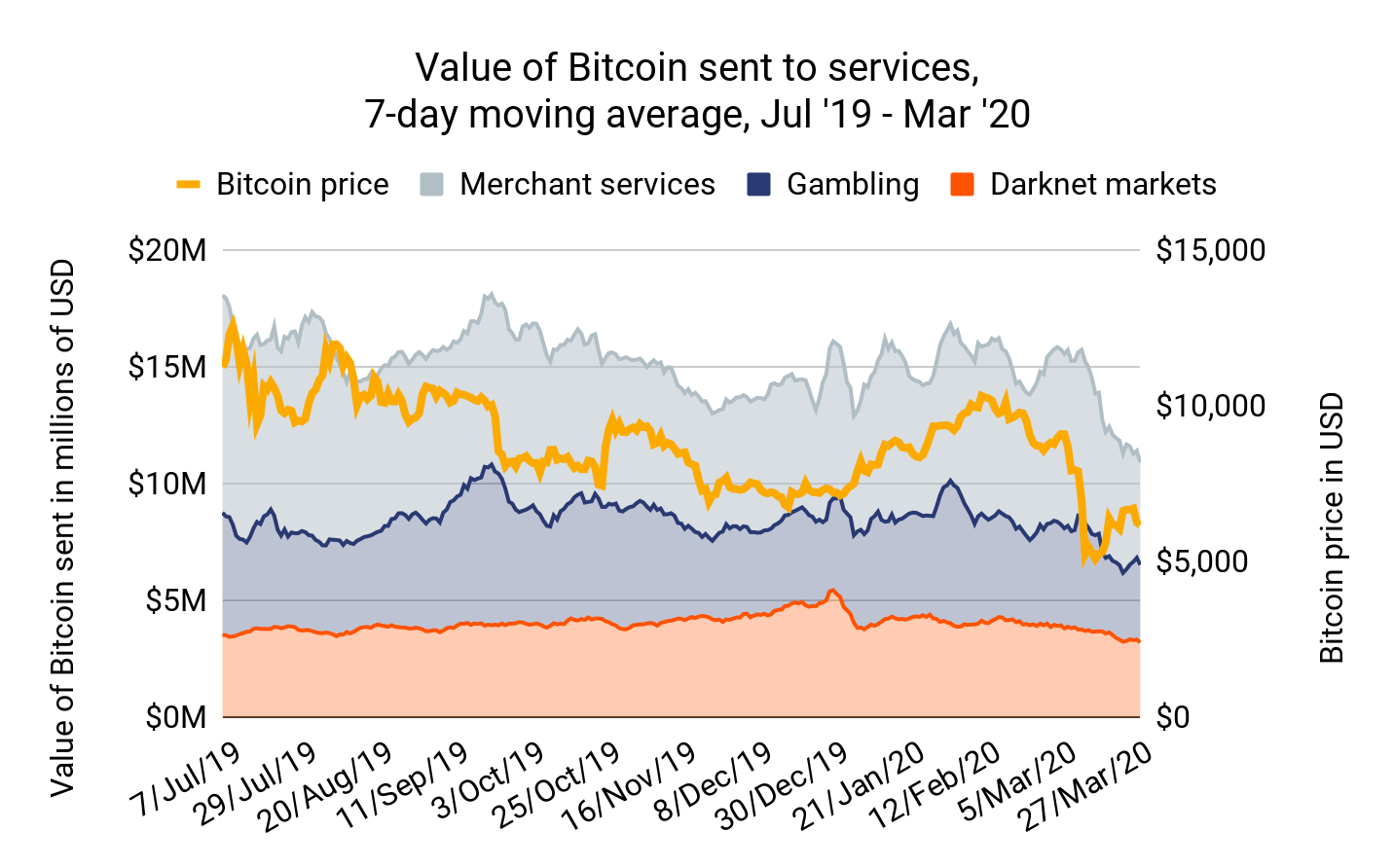 Most conspicuous of all is the change in user behavior on darknet marketplaces, which usually has only a weak negative correlation to Bitcoin’s price. Since the outbreak, however, this correlation has reversed and strengthened — leading to a significant decrease in darknet market revenue.

Chainalysis points to possible external factors to explain this trend, noting that illicit substances such as recreational drugs may be harder to come by due to the impact of disrupted supply chains worldwide:

“Recent reports point out that Mexican drug cartels are having a harder time sourcing fentanyl, as China’s Hubei province — a hub of the global fentanyl trade — has been hit hard as the epicenter of the outbreak. Such disruptions […] could be hampering darknet market vendors’ ability to do business.”

With gambling, its marginally positive correlation to Bitcoin price has corrected to zero since early March 2020 (i.e. no relationship), signaling that there appears to be no discernable impact of the pandemic on gamblers’ behavior.

Chainalysis closes its report noting that with China’s gradual comeback from the domestic COVID-19 crisis, darknet activity now appears to be seeing a gradual recovery there.

In January 2020, a Chainalysis report revealed that the volume of cryptocurrency flows on darknet markets had doubled in 2019 for the first time in four years. Pandemic Is Changing BTC Usage in ‘Unexpected Ways’