Audio-focused smart glasses seem like a good idea in theory, letting you listen to music without earphones, but simply by piping it through your eyewear. We’ve yet to test a pair that works very well, though, with the Amazon Echo Frames and Bose Frames Tempo offering relatively mediocre sound quality compared with a dedicated pair of earbuds. Unfortunately, the $199.99 Razer Anzu Smart Glasses don’t manage to change this impression. They look good and their microphones capture speech clearly, but the audio performance they deliver just isn’t what it should be for the price. Ultimately, you’re still better off combining a good pair of earphones with your standard glasses.

The Anzu Smart Glasses looks like an ordinary—albeit stylish—pair of glasses or sunglasses (the lenses are interchangeable), at least from the front. The frames are glossy black plastic, available with rectangular or round lens shapes, in small and large sizes for each style. When viewed head on, they look virtually indistinguishable from traditional glasses.

When viewed from the side, you can see that the temples thicken considerably, arching out before curving back up to slide behind your ears. These thicker parts hold the electronics, including downward-firing speaker drivers, wireless circuitry, and a battery. Contact points for the included proprietary charger sit near the front of the temples, on the underside. Small bumps on the outsides of the temples at the same position indicate the touch-sensitive controls. You can tap to answer/end calls and play/pause tracks, double tap to skip forward, and triple tap to go back.

The glasses comes with clear blue light blocking lenses installed, and an additional set of polarized sunglass lenses in the box. You can easily (and carefully) switch between them by popping out the current lenses and snapping the other ones in place. Razer doesn’t directly offer prescription lenses, but it partners with Lensable to offer compatible prescription lenses starting at $77.

The glasses are rated IPX4, so they’re splash resistant, but not fully waterproof. Aside from the charger and two sets of lenses, they come with a faux leather carrying case and a microfiber cleaning cloth.

According to Razer, the Anzu Smart Glasses can last for up to five hours of audio playback. The glasses turn off automatically when they’re folded.

The Razer Audio app for Android and iOS provides some limited customization options. You can remap any of the tap gestures to different commands, though no volume controls are available. You can also change equalizer presets between three modes: Default, Enhanced Clarity, and Treble Boost. That’s about it for audio tweaking, though. The app can also toggle the low-latency Game Mode, but this is already controllable on the glasses themselves by triple tapping the touch panel and then holding it for two seconds.

The glasses uses down-firing drivers aimed at your ears when worn, directing sound into them. Because there’s nothing but air between the drivers and your ears, certain limitations must be expected compared with conventional earphones or headphones. First, the angled drivers require you to wear the glasses close to your face, to further angle the sound properly into your ears. This isn’t a problem in most cases, but if you perch the glasses a little forward on your nose to avoid fogging them when wearing a face mask, the sound volume and quality will drop noticeably.

There’s no noise isolation to block out distractions, either, which means any surrounding sounds can potentially interfere with or even eclipse whatever you’re listening to. It isn’t a problem for quiet rooms, but loud street noise and surrounding chatter can be very easily heard.

Similarly, sound leakage from the glasses is a risk, meaning anything you listen to can potentially be heard by people around you. That said, because the drivers are so directional and have such little acoustic range, it’s very hard to pick up anything clearly unless you’re wearing the glasses. 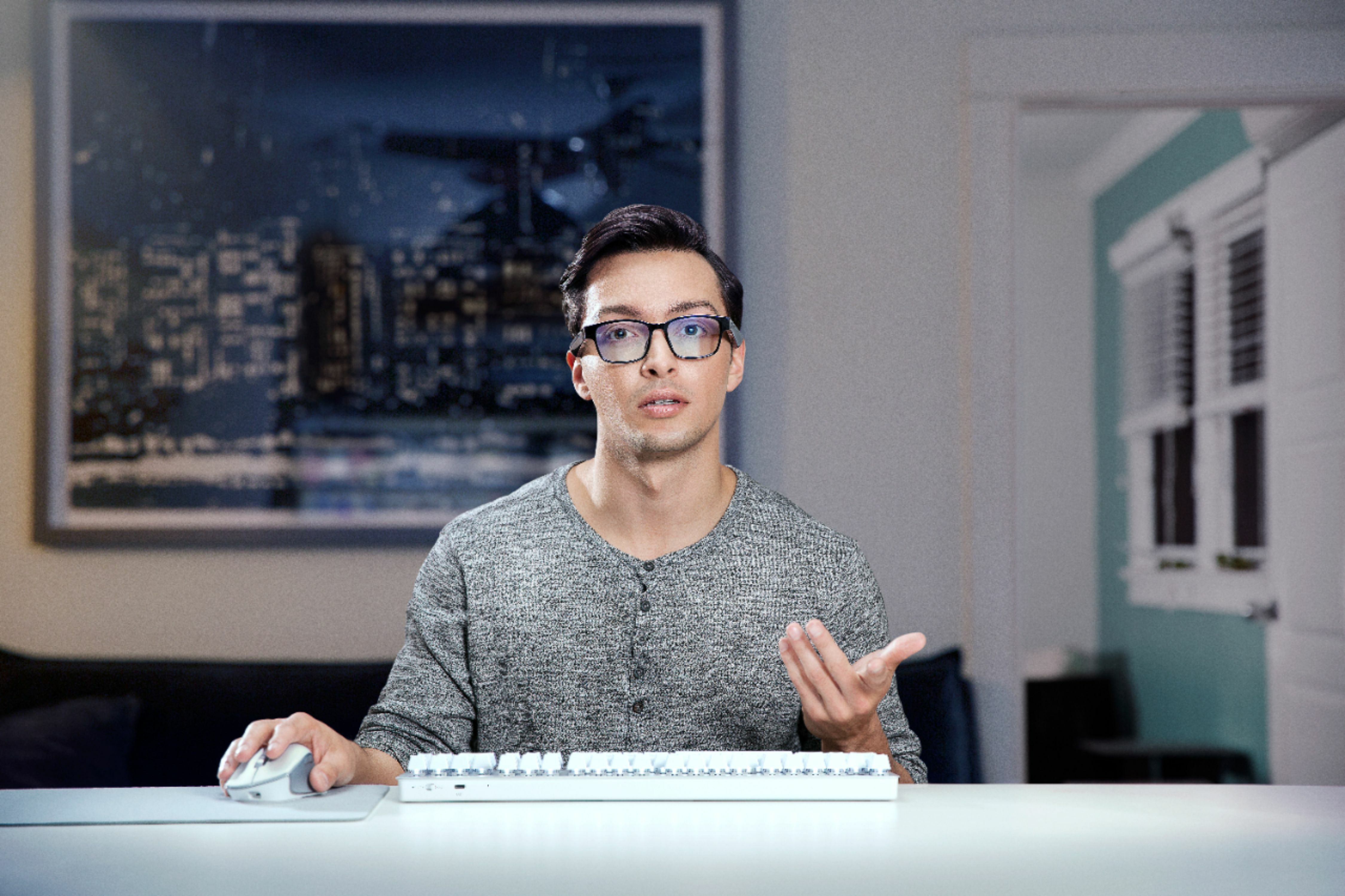 In terms of sound quality, don’t expect much bass here. Again, the complete lack of sound isolation and the small, highly directional drivers means almost no low-frequency sound can hit your ears with any appreciable force. In our bass test track, The Knife’s “Silent Shout,” both the bass synth notes and kick drum hits sound like barely present pops, with little to no bass response. The weak bass is particularly noticeable outside, where any noise can further get in the way of the lower frequencies.

Listening in a relatively quiet room, Yes’ “Roundabout” sounds good, but limited. The opening acoustic guitar plucks manage to get a bit of low-mid resonance, though there’s little high-frequency finesse to give a sense of string texture. When the song properly picks up, the bassline and vocals sit near the front of the mix, with the former coming through in steady, poppy notes that stand out a bit but still don’t produce much power in the lower frequencies. The guitar strums and cymbals sit slightly back, with limited high-frequency response preventing them from getting as much presence as the mids.

The Crystal Method’s “Born Too Slow” also suffers from similar limitations. The drums, synths, and vocals all sit squarely in the middle of the mix, with most presence from the low-mids to high-mids. The backbeat sounds a bit more poppy than thumpy, and doesn’t reach very low, while the riffs don’t cut through the mix quite as sharply as they usually do.

While the glasses don’t impress with their audio performance, their microphones work very well for phone calls. Test recordings sounded loud, clear, easy to understand despite a bit of Bluetooth artifacts.

The Razer Anzu Smart Glasses are stylish, with swappable lenses and strong microphones, but like other audio-focused glasses we’ve tested, they simply don’t sound good enough to justify their price. If you’re set on on pair of glasses that can play music, the Amazon Echo Frames are $20 less and feature hands-free Alexa voice assistance, while the Bose Frames Tempo cost $50 more but sound the best of the bunch. Still, we simply recommend going à la carte with a good pair of wireless or wire-free headphones.